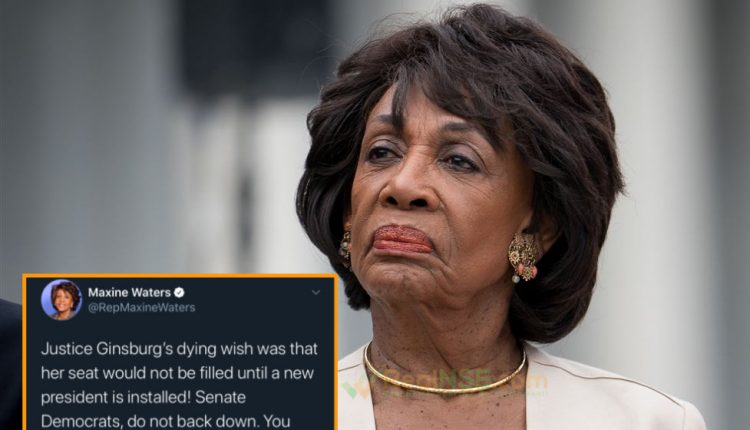 Ginsburg was fighting ongoing health issues for quite sometime. She refused to step down from the highest court in the land even with her drastic health decline. This brought criticism from some. Despite Ginsburg being quite nasty to Trump in the past, the President offered his condolences.

President @realDonaldTrump on the death of Justice Ruth Bader Ginsburg: “She led an amazing life…She was an amazing woman, whether you agreed or not…I am sad to hear that.”#RIPRBG pic.twitter.com/VTqNfohK8X

President Trump has already nominated two Supreme Court Justices in his first term, and it now could be three.

However, California Congresswoman Maxine Waters is already trying to prevent a vote from happening for a new SCOTUS.

Before even offering condolences, Waters immediately took the death and used it as an opportunity to not only bash the President but also try and block any possible vote in the Senate for a new SCOTUS.

Justice Ginsburg’s dying wish was that her seat would not be filled until a new president is installed! Senate Democrats, do not back down. You have a tough fight ahead but our future is on the line! No SCOTUS appointment before the election!!!

The President has a constitutional right to nominate a new Supreme Court Justice when a vacancy happens. Furthermore, the President has not named a nominee yet. For Maxine Waters to attempt to sabotage a hearing when a personal hasn’t even been named is completely irresponsible.