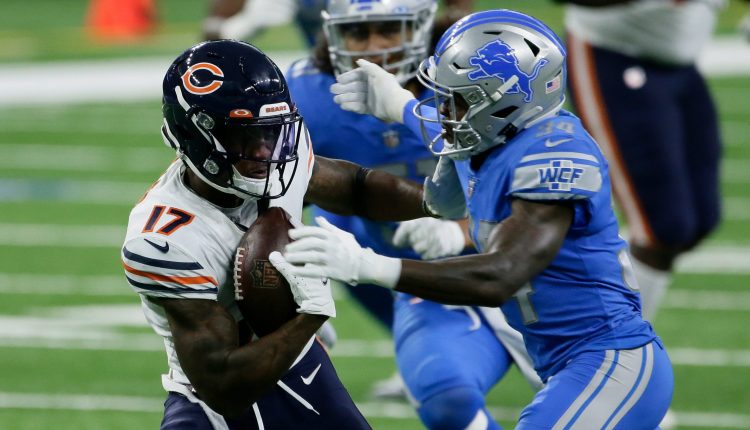 The Lions had a big 23-6 lead, but blew it. Not in parts, but all in the fourth quarter. Losing to the Bears 27-23, they left the field looking more depressed than usual.

The Lions started good originally. Adrian Peterson showed the Detroit Lions why he was worth getting. He took the ball 19 yards on his very first carry as a Detroit Lion.

In all Adrian Peterson got 93 yards on 14 carries, three catches for 21 yards, with a good 6.6 yards per carry. That is in all 114 yards of total offence.

But either offense failed to get much going for them and settled for field goals.

Tracy Walker, who came off the bench and proved he needed to stay on the field. He became the 2nd DB in team history to produce a game with at least 5 defensive tackles, 2TFLs and 2 special teams tackles. So he did well for himself and he might have secured a top spot on the depth chart with his performance.

Trey Flowers did well as well, making some great plays in a rather bad defense. It was so bad, a strange mistake was made by Lions linebacker Jamie Collins Sr. whom headbutted the ref in the shoulder, drawing an obvious personal foul penalty, along with an ejection.

Detroit kept the pressure after big plays from Marvin Jones Jr. and our once favorite Patriot Danny Amendola on third-and-17.

It was after the big return from Patterson, Trubisky led Chicago into the red zone, just before the fourth quarter. Then in that quarter, everything went right for the bears as Jimmy Graham got the ball and the touchdown,

23-13, Lions still had the edge over the Bears. Then they did something odd, they did not go for a drive, much less bleed the clock with run after run.

On the first down they punted the ball back to Chicago.

Trubisky almost made them pay for it but got sacked by Trey Flowers.

The Bears naturally made them pay for it with Trubisky throwing to Javon Wims for the touchdown. 23-20 Lions and the fans got jittery.

Three minutes remaining, they made more mistakes. Stafford tried to split the Bears defense to Marvin Jones, but the ball deflected up in the air and into the waiting hands of Kyle Fuller. The Bears had the ball already in field goal range near the two-minute warning.

Three plays later Trubisky got Anthony Miller for a 27-yard touchdown. Now the Bears led the Lions, 27-23. At that point, anyone watching would have torn their hair out. But the humiliation was not over yet.

Stafford tried to work some magic. The Lions made it all the way to the Bear’s red zone. Then, with the hope of all the Detroit Lion’s fans on the edge of their seat, Stafford threw to a wide open D’Andre Swift and he dropped the ball.

It was over, the Bears won.

Adrian Peterson being the leader and the senior to D’Andre Swift did what came natural and told Swift not to let the drop shake his faith. After all they will need him going forward he said.

At least one good thing came out of this match, a stronger rookie. Let’s hope they can make a stronger impact going forward.

The Lions made a lot of mistakes. The Lions failed to convert when they needed to the most. It is a habit they will have to break. They need to get it done in those clutch moments. The best teams do after all.

Why do people joke about having OCD?

Dustin Poirier Might Not Get His Fight At the UFC 254