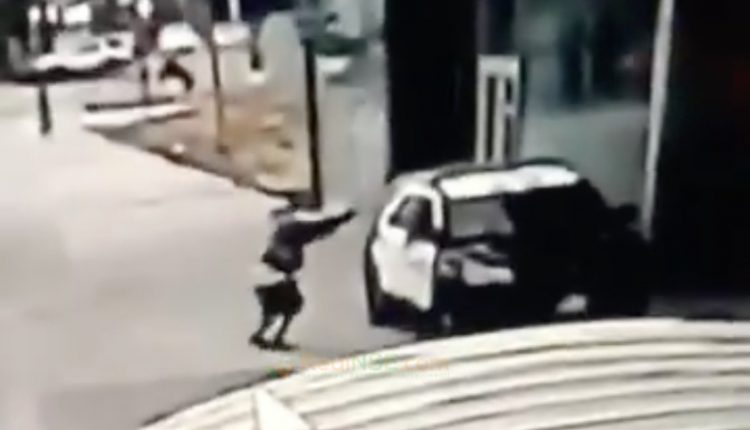 Late last night, an armed suspect ran up on two LA County sheriffs who were sitting in their squad car and opened fire.

Update: The gunman walked up on the deputies and opened fire without warning or provocation. pic.twitter.com/cBQjyKkoxJ

The act was caught on a nearby security camera and has since been released by the LA County sheriffs department along with a statement on their official Twitter account.

Update: One male deputy and one female deputy were ambushed as they sat in their patrol vehicle. Both sustained multiple gunshot wounds and are in critical condition. They are both currently undergoing surgery. The suspect is still at large.

The two officers who were shot were taken to the hospital where they underwent emergency surgery. As of right now, there is no update on their condition.

The suspect is still at large.

An unlawful protest ensued outside the hospital where the sheriffs are being treated. Some of the protesters shouted “we hope they die” while blocking the emergency room entrance.

Black Lives Matter activists confront law enforcement at Los Angeles hospital where wounded officers were taken after they were shot. “To their family: I hope they f**king die.” pic.twitter.com/bPgatQZYRI

One of the protesters refused to leave after being ordered to disperse. He was placed under arrest. During this, he resisted arrest, and another incident occurred.

To the protesters blocking the entrance & exit of the HOSPITAL EMERGENCY ROOM yelling “We hope they die” referring to 2 LA Sheriff’s ambushed today in #Compton: DO NOT BLOCK EMERGENCY ENTRIES & EXITS TO THE HOSPITAL. People’s lives are at stake when ambulances can’t get through.

(2/3) During his arrest, a struggle ensued at which time a female adult ran towards the deputies, ignored repeated commands to stay back as they struggled with the male and interfered with the arrest…

(3/3) The female adult, who was later identified as a member of the press, did not identify herself as press and later admitted she did not have proper press credentials on her person. Both individuals have been arrested for 148 P.C.

Joe Burrow’s First Failure, The Bengals lose 16-13 to the Chargers