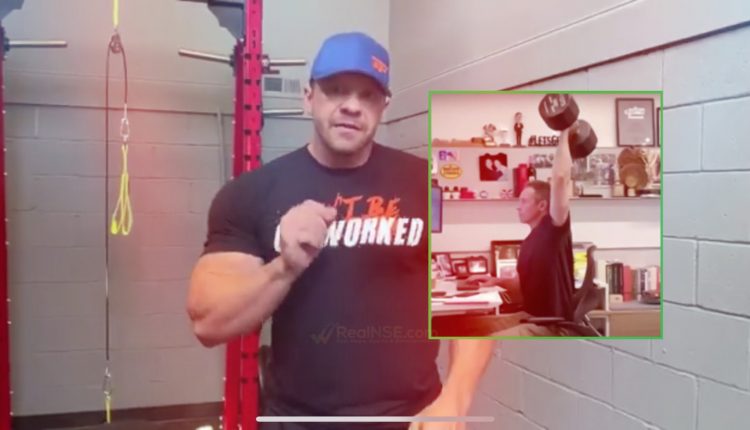 Longtime YouTuber and pro-bodybuilder Marc Lobliner thinks that CNN’s Chris Cuomo is using a fake weight in the picture he posted on social media holding a supposed 100 pound dumbbell over his head while still typing on the computer.

CHALLENGE TO @ChrisCuomo .Prove you’re not a liar. Prove that you can actually lift the weight you’re shown with.I will fly anywhere you’d like to witness it and we can either have a charity event or I’ll donate $1k to a charity of your choice. PLEASE RETWEET! pic.twitter.com/5vVZpUoW8S

“So there’s a picture circulating of Chris Cuomo from CNN chilling at his desk typing with one hand with a 100-pound dumbbell overhead,” Lobliner said in a video posted on Wednesday.

“If you are part of the lifting community or know anybody who is, there’s one thing we hate: and that’s when you fake it. Because it makes what we do look insignificant.”

“I’m confident those are fake dumbbells,” Lobliner continued. “And I’m also willing to bet Chris Cuomo $1000 that he can’t sit at a desk holding a 100-pound dumbbell typing.”

You can tell something about a person’s character when they lie,” he said. “If you lie about that, how are you going to be credible on the news? Your fans, and people who follow you who don’t know lifting, don’t know how disrespectful this is to the lifting community and how fake this. They think you’re that strong.”

“I challenge you, Chris Cuomo, to a lift-off. I’ll come to wherever you are, show you the big bad bodybuilder on CNN“

Of course it was a fake weight. Cuomo will not be responding to Lobliner. I can’t seem to find the original picture on any of Cuomo’s social media accounts either. It may have been deleted.