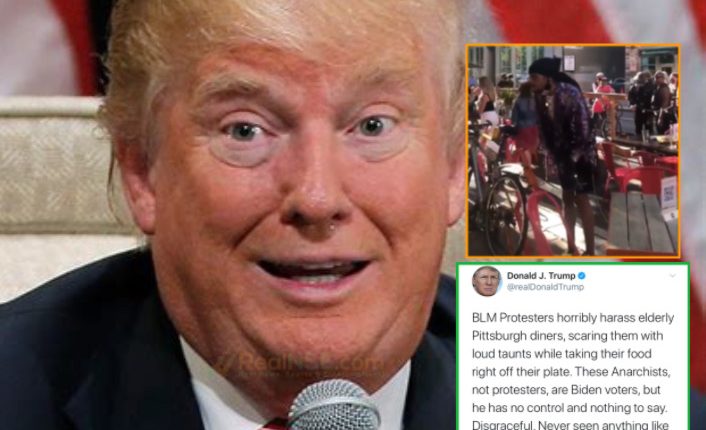 President Trump unloaded on the anti-white hate group Black Lives Matter after they harassed white people at a Pittsburgh restaurant simply for being white.

Cities across the US have seen countless acts of senseless violence by BLM. Over the weekend, Black Lives Matter performed another hate filled incident. It involved innocent bystanders yet again.

BLM took to the streets of Pittsburgh to show its racist vitriol towards white people by berating customers at an outdoor Italian restaurant.

They got into the faces of the white folks screaming: “Fuck the Police and fuck you white people that built the system set against mine, you old dick.”

They also went around literally eating the food off of people’s plates and smashing plates and glasses.

The President seems to be just as fed up as the rest of us. He tweeted today calling BLM “thugs” and bashing the Democrats for allowing this to continue in their cities.

And because of weak and pathetic Democrat leadership, this thuggery is happening in other Democrat run cities and states. Must shut them down fast. Biden and his most Liberal in Senate running mate, Kamala, won’t even talk about it. They won’t utter the words, LAW & ORDER!

President Trump offering chance to be his VIP guest at debate