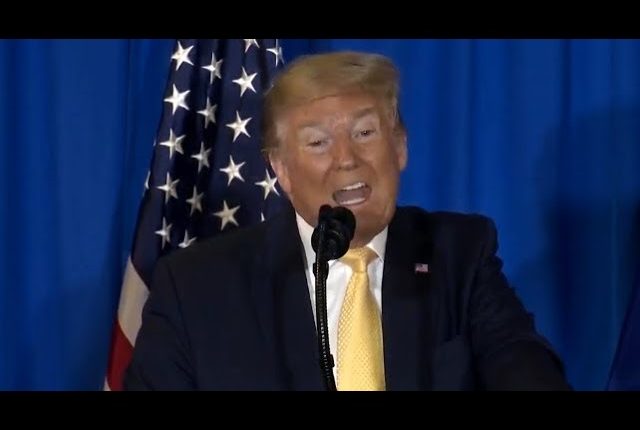 While speaking at a “Prisoners Graduation Ceremony” event in Las Vegas President Trump addressed the news of longtime friend Roger Stone being sentenced to 40 months in prison. This is the first time he has commented on the sentencing that was handed down earlier today.

The President feels strongly that Stone did not get a fair trial after news broke last week that the lead juror Tomeka Hart had a clear bias against President Trump.

Before we go any further I want to address today’s sentencing of a man, Roger Stone. It has become a big part of the news over the last little while and I’m following this very closely and I want to see it play out to its fullest because Roger has a very good chance of exoneration in my opinion. I’ve known Roger Stone and his wife who’s really a terrific woman for a long time and Roger’s definitely a character. Everybody sort of knows Roger. Everybody knows him. And most people like him. Some people probably don’t but I do and always have. He’s a smart guy, he’s a little different but those are sometimes the most interesting. But he’s a good person,” he continued. “Roger was never involved for the Trump campaign for president. I think early on long before I announced he may have done a little consulting work but he was not involved when I ran for president.”

“Its my strong opinion that the forewoman of the jury – the woman that was in charge of the jury – is totally tainted. When you take a look, how can you have a person like this? She was a anti-Trump activist – can you imagine this?” He went on to talk about her anti-Trump social media posts as well. “I don’t know this as a fact, but she has a horrible social media account. The things she said on the account were unbelievable. She didn’t reveal that when she was chosen.”

”What happened to him is unbelievable,” the President continued. “They say he lied, but other people lied too. Just to mention, Comey lied, McCabe lied, Lisa Page lied, her love Strzok – Peter Strzok lied.“

He continued on, “so if this woman was tainted, I hope the judge will find that she was tainted. And if she isn’t tainted that will be fine too. But I’m not going to do anything in terms of the great powers bestowed upon a President of the United States, I want the process to play out. I think that’s the best thing to do. Because I’d love to see Roger exonerated, I’d love to see it happen. Because I personally think he was treated very unfairly.”

It seems that the President is leaning towards pardoning Roger Stone but is willing to give it some more time for the court system to continue playing out. Stone will most likely fight for a new trial.