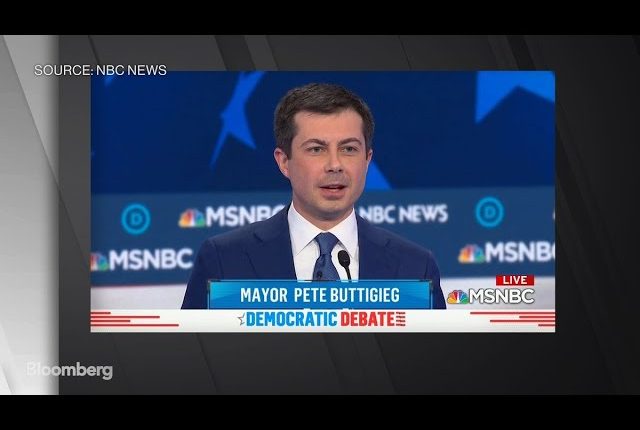 Buttigieg Calls Sanders and Bloomberg the ‘Most Polarizing’

Feb.19 — Pete Buttigieg calls Bernie Sanders and Mike Bloomberg “the two most polarizing figures on this stage.” He spoke at the Democratic debate in Las Vegas. Michael Bloomberg is the founder and majority owner of Bloomberg LP, the parent company of Bloomberg News.

We could wake up two weeks from today – the day after Super Tuesday – and the only candidates left standing will be Bernie Sanders and Mike Bloomberg. The two most polarizing figures on this stage. And most Americans don’t see where they fit if they’ve got to choose between a socialist who thinks that capitalism is the root of all evil and a billionaire who thinks that money should be the root of all power. Let’s put forward someone who actually lives and works in a middle-class neighborhood in an industrial, midwestern city. Let’s put forth someone who is actually a Democrat.

Applause echoed throughout the room. A very impactful statement by Buttigieg, who is becoming appealing to more moderate Democrats, despite many his views – in my opinion – are still quite radical.

AG Barr is getting frustrated with President Trump says he won’t be “bullied by president”.