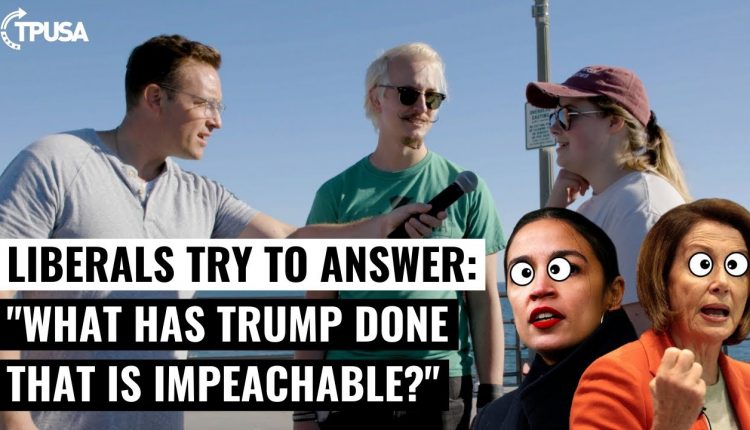 Liberals Try To Answer: “What Has Trump Done That Is Impeachable?”

THIS IS HILARIOUS! Benny Johnson travels to the heart of Socialist California for Benny On The Block to ask residents what President Trump actually DID thats impeachable… The results are LAUGHABLE and make it obvious that the Constitution isn’t being taught in California Schools!

Benny Johnson of Turning Point USA took to the streets of Huntington Beach California to ask some locals if President Trump should be impeached for his video segment “Benny On The Block”. The responses were shocking and just outright sad.

California is a very liberal state. According to public voter registration statistics, 43% of the state is registered as Democrats compared to only 23% being registered Republicans.

Those statistics really show in this video. Now obviously, the video is edited. Meaning, the creator most likely didn’t get only impeachment supporters. But that’s not even the issue. The answers to why they support impeachment were what was so startling.

Some of the reasons they expressed for supporting the removal of a president that half of the country voted for were because of his tweets, because “he’s a complete idiot”, because he’s not a politician and my favorite of them all “basically in layman terms because it’s just uh like no quid pro”.

I use to find these type of videos to be very funny. Unfortunately, I find them just sad now. I’m absolutely fine if someone disagrees with my political views. But to see someone be so misguided and fall for a complete lie is disturbing.