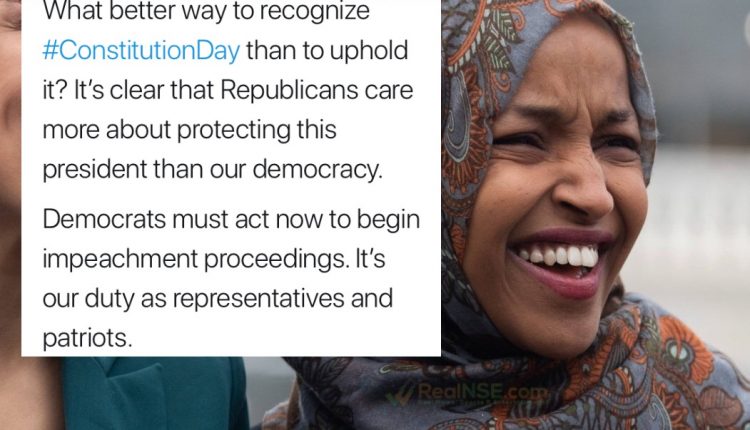 Representative Ilhan Omar says in order to protect our democracy we must impeach the President.

What better way to recognize #ConstitutionDay than to uphold it? It’s clear that Republicans care more about protecting this president than our democracy. Democrats must act now to begin impeachment proceedings. It’s our duty as representatives and patriots.

Just to be clear, she is not only saying we must impeach a president that was elected through our democracy, but also Congress must do something that is widely unpopular with the American people… That is the exact opposite of democracy.

@IlhanMN @daniels_vincent The President was elected though Democracy, and you say it’s undemocratic that he isn’t impeached, despite it being widely unpopular.

Some polls show impeachment support as low as 37%. The House of Representatives does not have the support to actually start the impeachment process. The number of times some Democrats have attempted to start, it has failed miserably.

Omar and many of her colleagues aren’t trying to do the will of the American people, but rather do their own bidding.

El Camino Review | The Breaking Bad Movie… About Nothing