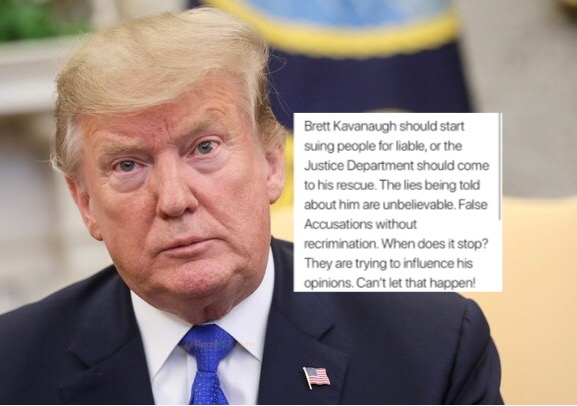 A day after a new allegation has come to light against now Supreme Court Justice Brett Kavanaugh, President Trump took to Twitter to slam the radical left and the mainstream media for slander.

Now the Radical Left Democrats and their Partner, the LameStream Media, are after Brett Kavanaugh again, talking loudly of their favorite word, impeachment. He is an innocent man who has been treated HORRIBLY. Such lies about him. They want to scare him into turning Liberal!

Brett Kavanaugh should start suing people for liable, or the Justice Department should come to his rescue. The lies being told about him are unbelievable. False Accusations without recrimination. When does it stop? They are trying to influence his opinions. Can’t let that happen!

The new allegation was reported by The New York Times yesterday. It comes from a male classmate at Yale, Max Stier. He claims he saw a drunken Kavanaugh at a dorm party with his pants down who thrusted his penis into a females hand.

Of course, there is no proof to this allegation. The alleged female in the incident, Deborah Ramirez, says this happened in the late 80’s. This allegation was not included in the FBI investigation during the confirmation hearing last year due to a lack of credible witnesses or evidence.