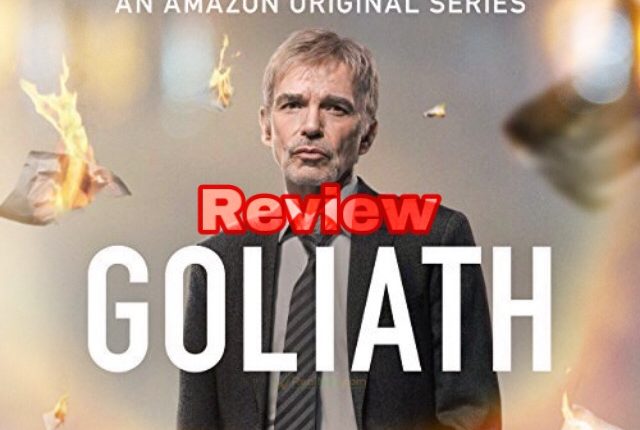 After finishing Sneaky Pete Season 3 I immediately searched for another Amazon original series. I found ‘Goliath’ with Billy Bob Thornton and was very intrigued. Believe it or not, I actually wanted to find a good lawyer/court show. Sure enough, I found just what I wanted.

A disgraced lawyer, now an ambulance chaser, gets a case that could bring him redemption or at least revenge on the firm which expelled him.

This review will be for season one and season two. No spoilers.

Let me just come out and say, I truly enjoyed this show. I love a good law show. Sadly, they’re few and far between. Billy Bob is a great actor. He has a certain arrogance to him that makes him absolutely perfect for rolls like this, a washed-up former big-shot trial attorney that ends up at the bottom of a bottle every night. Thornton’s character reminds me a bit of his role in Bad Santa, but without the comedy.

Thornton is such a confident actor. That really shows during the whole series. I never questioned him as a lawyer or didn’t buy his portrayal. He really was Billy McBride, an Attorney.

The first season throws you right into the mix. You don’t have to wait to get going. It opens up to two guys on a fishing boat witnessing a massive boat explosion. This incident is the backdrop for the whole season and the case that Billy takes on.

One of the most underrated aspects of any good tv show is how it ends. Does I t all work out in a way that is believable, does it offer closure? Well, ‘Goliath’ checks all of those boxes in season 1. The season-ending makes you feel you got closure. It’s not confusing, or hard to follow.

I enjoyed the second season of ‘Goliath’. However, it took a turn into almost a horror story. The second season is very different from the first, and not in the best way. The evil mastermind for this season is a big-time Mexican drug lord. The cartel is pretty damn ruthless in real life, and they tried to portray that on the show. The bloody gruesomeness didn’t really fit with the premise of the show, thought.

The storyline for the season is actually really good and pretty unpredictable.

I am really looking forward to the third season. The trailer looks really amazing. The biggest problem I had with the show is the lack of episodes. Each season only had 8 episodes each.

Official Trailer of Goliath Season 3 ” Goliath returns 10/4. Watch the current season with Prime: http://bit.ly/GoliathPrimeVideo ” SUBSCRIBE: http://bit.ly/PrimeVideoSubscribe About Goliath: Once a powerful lawyer, Billy McBride is now burned out and washed up, spending more time in a bar than a courtroom.

A recap of the NFL offseason