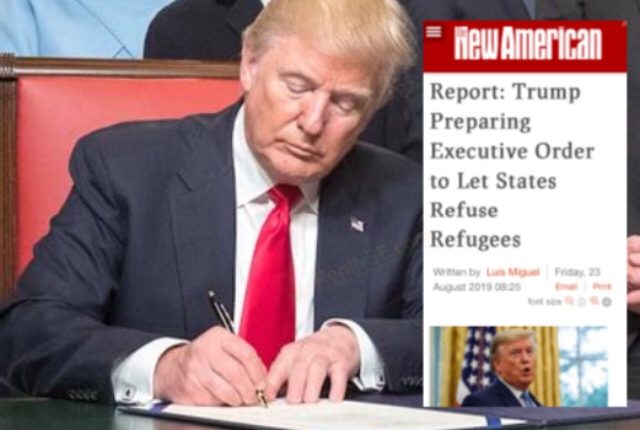 Article by Luis Miguel from The New American

Is President Trump returning to form on immigration?

The White House is preparing an executive order that would allow state and local jurisdictions to deny entry to refugees even if they have been approved for settlement by the federal government, according to a draft of the policy obtained by NBC News.

The draft features language stating that “the federal government will resettle refugees only where both the relevant state and local governments have consented to participate.”

Under the order, the federal government would have to find another location for refugees if the jurisdiction in question does not agree to take them in. An exception would be made for the resettling of spouses or children of those already settled.

According to a DHS official, the plan is currently being reviewed by lawyers at various government agencies.

Peter Boogaard, a former Obama advisor who worked on immigration issues, criticized the order, claiming it would prevent religious organizations such as the Catholic Church from resettling refugees and “would also have a dramatic impact on the ability of future administrations to return refugee admissions to the normal historic levels.”

Boogaard’s comment appeared assume that “normal historic levels” are those that existed under the Obama administration.

Trump: I was “really” afraid of Gillibrand