Trump: Chris Cuomo is “nuts” and “shouldn’t have a weapon”1 minute read 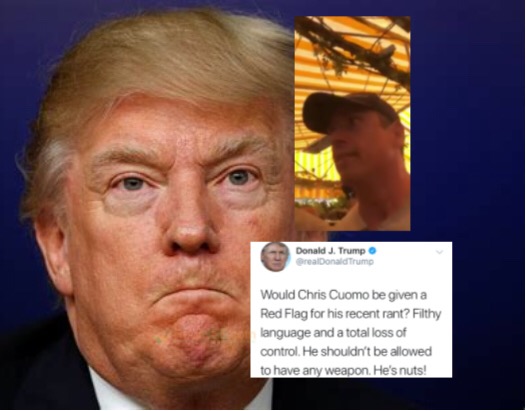 President Trump tweeted that Chris Cuomo would probably get a “red flag” after a video of him yelling and threatening a man who called him “Fredo” was released earlier today.

Would Chris Cuomo be given a Red Flag for his recent rant? Filthy language and a total loss of control. He shouldn’t be allowed to have any weapon. He’s nuts!

This is very interesting and quite confusing seeing as Trump came out after the recent shootings in support of red flag laws.

Mental illness and hatred pulls the trigger, not the gun. Fourth, we must make sure that those judged to pose a grave risk to public safety do not have access to firearms, and that, if they do, those firearms can be taken through rapid due process. That is why I have called for red flag laws, also known as extreme risk protection orders.

I’m not sure if Trump’s trying to bash red flag laws or not. But his tweet shows how red flag laws are not only unconstitutional but also ridiculous.

Over 170,000 people want Joe Rogan to host next debate