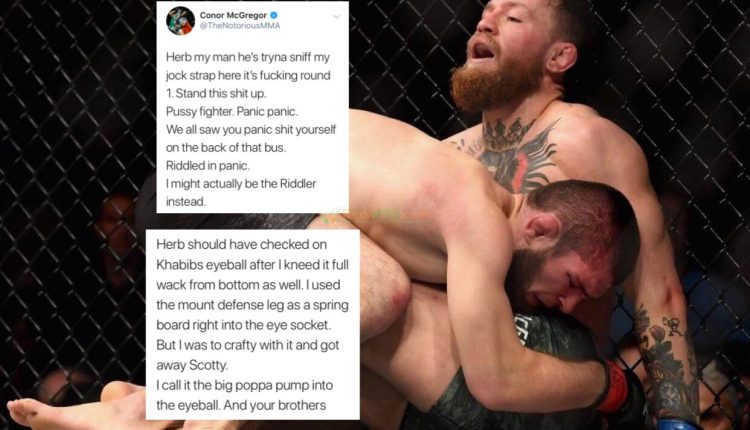 Conor McGregor seemed to be pretty fired up during UFC 240 last night. He took to Twitter while watching the fights. McGregor was most likely fired up due to the main event being for the Featherweight championship. A belt that he once held. Also, the main event included a former opponent, Max Holloway.

McGregor also took the opportunity to re-spark his feud with Khabib Nurmagomedov even calling him a “pussy fighter”.

Herb should have checked on Khabibs eyeball after I kneed it full wack from bottom as well. I used the mount defense leg as a spring board right into the eye socket. But I was to crafty with it and got away Scotty. I call it the big poppa pump into the eyeball.

Herb my man he’s tryna sniff my jock strap here it’s fucking round 1. Stand this shit up. Pussy fighter. Panic panic. We all saw you panic shit yourself on the back of that bus. Riddled in panic. I might actually be the Riddler instead.

The tweets were most likely an attempt at getting a rematch with Khabib. Conor immediately wanted a rematch after losing to Khabib at UFC 229 back in October of last year. Dana White has said a number of times that Conor will have to fight his way back to a rematch with current Lightweight champion Khabib.

Nurmagomedov is training for his coming fight with Dustin Poirier at UFC 242 in September and has not responded to the tweets.