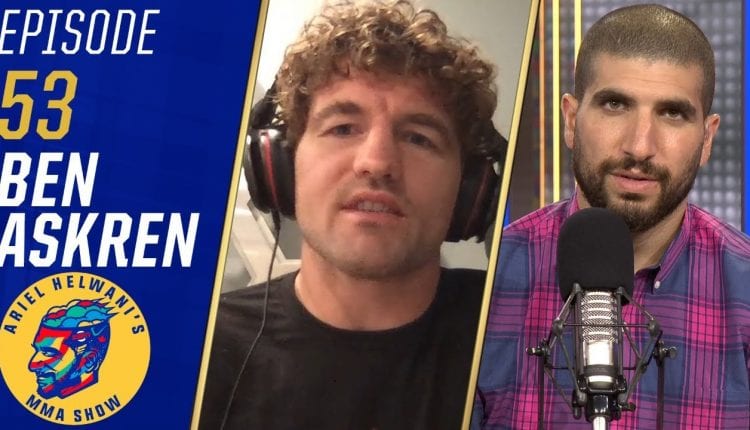 The undefeated Ben Askren had his second fight in the UFC. But sadly, that is where his undefeated streak died due to a devastating flying knee knockout from Jorge Masvidal.

This was not only Ben Askren’s first lost, but also the first time he’s even been knocked out.

The knockout was quite scary. Jorge through the perfectly knee right to Ben’s left ear, sending him stiff to the canvas.

I honestly got a little concerned when I saw this. Not only am I a fan of Ben Askren, but also worried for a fellow human being. He lied there stiff and a board.

Shortly after the fight, I went to Ben’s Twitter feed for an update. Nothing…. then later on he tweeted: “well that sucked”. I kept checking throughout Sunday and Monday to see if Ben would maybe do a livestream or a video. But he did not. I really just wanted to see how his spirits were and if he was going to possibly retire – as he has talked about before.

Thankfully, the best MMA journalist Ariel Helwani was able to get Ben on his show today and touch on all of these topics including possible retirement.

Ben Askren joins Ariel Helwani’s MMA Show to look back at his knockout loss to Jorge Masvidal at UFC 239 in Las Vegas. Askren says he doesn’t have memory of the knockout, but has watched it. Askren believes he would’ve earned a title shot with a win, but doesn’t think that Masvidal will get one vs.

Ariel: Do you want to keep fighting?

Ben: Yeah, I mean obviously I haven’t thought of my path forward Ariel.

Ben also said that he is not hurt. He will have to sit out due to commission rules after a knockout. So he will be able to return in August.

Hopefully, he gets back to business and comes back smarter and even more dominate.

Joey Saladino files lawsuit against AOC for blocking him on Twitter