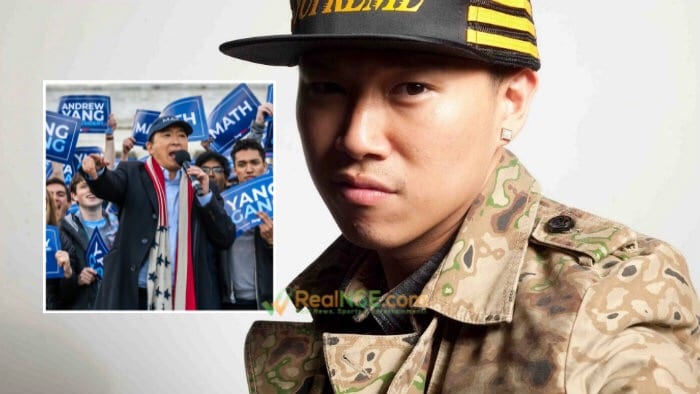 Remember MC Jin? He had the hit song “Learn Chinese” in 2009. That was after he won 7 straight weeks of “Freestyle Friday” on 106 N Park at the age of 19. Shortly after that Jin landed a record deal with Ruff Ryders.

Fast forward a bit and Jin – full name Jin Au-Yeung – has been all over the place. From finding his Christian faith, acting (2 Fast 2 Furious), stand up comedy and more. He still dabbles in Rap and Hip-Hop from time to time.

Jin released a 3:25 video on June 26th entitled: ‘Drew Yang Gang That’s Who I Hooked Up With’.

In the song, Jin gives the Democratic Presidential Candidate Andrew Yang his full endorsement. He even says all the other candidates are whack. And even goes into Yang’s ‘Freedom Dividend’.

It may sound odd that MC Jin would just come out of nowhere and drop a political track. But it isn’t. In 2008 he wrote a song for Obama, and sent it to his campaign MySpace page. Jin said that Obama put him as his number one friend on MySpace after that.

At the end of the video the camera guy asks Jin: “is he gonna win?” And Jin replies: “to be brutally honest. Like, it would be like a Chinese dude going on BET and winning 7 rap battles in a row. Is it impossible? No, but it definitely doesn’t happen often.”

The Democrats learned nothing from 2016