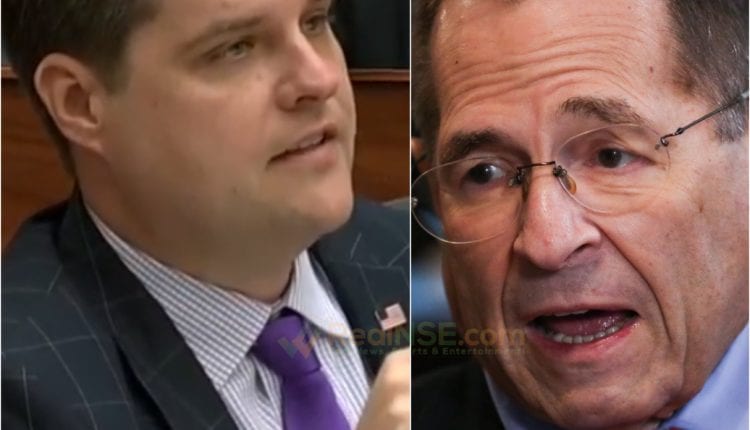 Republican Florida Congressman Matt Gaetz has shown once again that he is one of the few members of Congress that speaks for the majority of the American people. During yet another pointless hearing regarding the Mueller report and Russian collusion, Gaetz points out that once again the “witnesses” the committee called upon to testify about the report, have no further knowledge other than what’s available to the public and there are far more important issues that Congress needs to address.

Gaetz: “Mr. Chairman are you going to subpoena Robert Mueller. I-year-old back to you to answer.”

Nadler: “I’m not going to answer that at this time.”

Gaetz: “We are here in part two of lessons from the Mueller report. So I’m wondering how we’re going to learn those lessons. Maybe the folks here can teach us some lessons.

For the witnesses, so we don’t have to individually go through. Here’s the question. And raise your hand if you would answer this in the affirmative.  Do any witnesses here, have personal knowledge regarding the truth or falsity of any single material fact in the Mueller report?”

Not one of the witnesses raised their hands. Meaning, they have no further knowledge about the Mueller report other than what they read in the public report. I love that Congressman Gaetz asked this question. It really shows how Chairman Nadler and his fellow Democrats are just trying to drag this whole thing out despite the Mueller report being the fourth investigation into Russian collusion that found no collusion between the Trump campaign and Russia.

Gaetz went on to bring up a topic that a huge part of America is concerned about, and that is the crisis at the southern border.

“I think there is a far more critical issue that our committee should be addressing and that we could address. Right now we’re in a circumstance where upwards of 5,500 people are arriving everyday on our southern border. And this committee has the jurisdiction to reform our asylum laws, to secure the border, to make changes to ensure that we have a country that’s protected and a rule of law that’s maintained.”

Trump says Iran made a “big mistake” shooting down our drone