Is it time to get rid of the two parties in politics?6 minute read 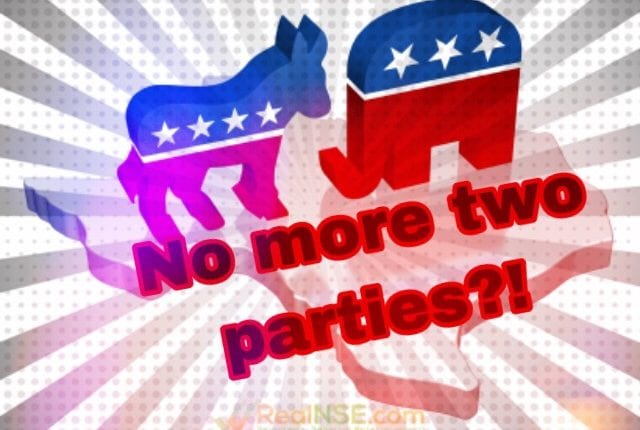 If Donald Trump’s presidency has shown us anything, it’s that there is far too much partisanship in our government. The Founding Fathers decided to create the three branches of government to ensure there is a balance of power. But I’m sure they never imagined that our government would come to a standstill or even be shut down because the two sides were not able to work together and come to an understanding. So, I present the question – should we get rid of the two-party system in politics?

I watch a lot of the Congressional hearings. One thing I notice every single time is the Republicans defend Republicans and the Democrats defend the Democrats. Both sides just pander to their base and point the blame to the other side. Basically, nothing gets done and nothing new is learned. If everyone just represented their state or district and not their party there would be no more “my colleagues on the other side of the aisle” talk. It would be one government body.

Voting for the party, not the person.

Sadly, many people cast their votes for the party and not the person. In fact, our elections are set up to encourage just that. During the primaries, if someone is registered to a certain party they are given a specific voter ballot for that party. For example, I’m a registered Republican. So when I went to vote on August 28th of last year for the midterms, I was given a ballot that only had the Republican candidates on it. If I wanted to vote for someone on the other side, I would not have been able to at that time. I would have to change my voter registration 29 days before election day. Another problem with this is that in some areas voters registered as an Independent can’t even vote in primary elections.

The elections only come down to two people. A Republican vs a Democrat. We always hear the phrase “the lesser of two evils”, when asking people who they are voting for. But what if it didn’t have to be that way? What if the people were actually able to select their president, for real. Not just have to go with who their “party” decides to nominate. Many people don’t even know how the nomination process works or what a “delegate” is. The parties have to nominate a person to represent them in the presidential race.

Have you ever went into the voting booth and saw a number of other candidates you never heard of? Wouldn’t it have been nice if you heard about them before you stepped into the booth so you could have learned more about their policies? Well, the two party system ensures that those candidates are kept in the dark. One thing the Republicans and Democrats agree on is that they are the only two parties that matter in politics and they will work together to keep it that way.

In order for a candidate to “qualify” for the debates, they have to poll at 15% in multiple polls. The problem with that is a majority of the big polling services only poll voters about the two parties. It’s a complete monopoly and the voters are the ones losing out.

Let me be clear. I agree with not letting just anyone on the ballot or in the debates. The ballot would be pages long and the debate stage would overflow. Not to mention the people who would pretend to run for office just for publicity or as a joke. Remember “Deez Nuts” from 2016? However, I do believe there should be another way. Fix the broken polling data. Ask about all candidates running. Not just the two main parties. Ask potential voters about the Independents, The Green Party, The Libertarian Party ETC. Let the public be informed of ALL the candidates who have filed their campaign papers.

If we do away with the two party system in politics, it would prevent grandstanding by both sides. If you watched the Kavanaugh hearings, you know what I mean. This is when I realized that something just isn’t working. It quite literally was a circus. Gang-raped? Drugging women by spiking the punchbowl? Come on. The whole thing was a disgrace to the whole body of Government.

What I think should happen.

We do away with all political parties. I know, it sounds crazy. I mean we’ve had Rep. and Dem. ever since the government started. But hear me out. This would force the candidates to talk about THEIR views, not the views of their party. But for them as the person. No one has each other’s backs. Each of them wants what’s best for their community and America.

Anyone can run if they pay a fee, or get a petition started and gets the required signatures to be sent able to appear on the debates. Each state would designate the number of signatures needed or the fee that would need to be paid. But this way, the candidate controls his outcome. He or she has multiple ways to get in front of potential voters. Without the party restraints.

Bernie Sanders vows AMNESTY to all illegals within first 100 days