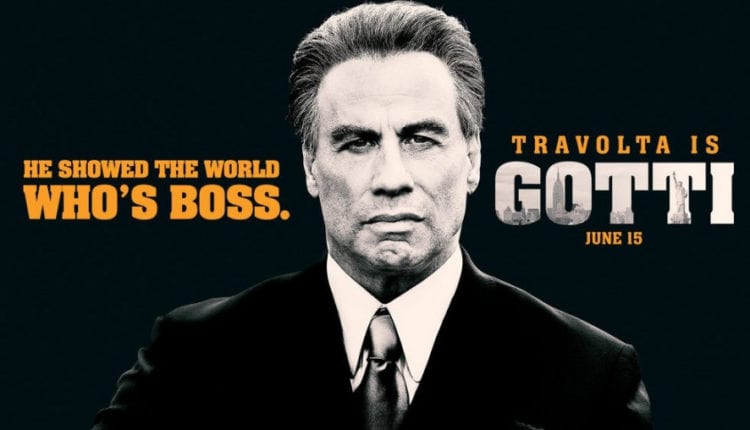 I know, I’m pretty late to the party on this one. I tried to get to the movies when Gotti first came out back in June of this year but wasn’t able to. I finally sat down to watch it today. Although I’m late, I figured I’d do a review since I was so excited when I first heard about this film. So here it is…

Going into this film I knew basically everything there is to know about John Gotti. Including many of the other members of the Gambino crime family. So I knew I probably wasn’t going to learn anything new. But I enjoy mafia movies and since they’re so few of them made nowadays, I try and watch all of them. Despite that, I was very interested in seeing John Travolta as a mob boss.

The story was pretty predictable. Like I mentioned I’ve seen all the possible documentaries, read some books ETC that pertained to John Gotti, so I knew the story. But how it was told felt almost rushed. As if the director didn’t care as much about painting a picture with the story, but rather touching on all the points of Gotti’s life that were notorious. I felt it may have been better if they told the story a little differently than all the other Gotti films or documentaries. This film felt almost identical to the 1996 HBO version of “Gotti. That film is still held in high praise. Many – including myself – say Armand Assante portrayed the best version of John Gotti of all. It seemed as though director Kevin Connolly was simply remaking that film with the little addition of John Gotti Jr at the end.

The selling point of this film was that it told more of the story from Gotti junior’s side. But that really wasn’t the case. They dedicated about 10 minutes at the end of the film to tell Junior’s story. That to me was disappointing. I understand that Gotti’s life was pretty crazy and extremely entertaining. So it’s hard not to tell his side of things. But when it’s been done so many times before, why do it again?

Now, for John Travolta’s protrayal of the Teflon Don. When I first started the movie I couldn’t help thinking that Travolta was trying way too hard to be a “mobster”. I kept thinking to myself: this is John Travolta as John Gotti. It was so distracting. But after a little while, I got past that. Travolta obviously didn’t make the best John Gotti. But his performance was good enough to not be the cause of the film being a disappointment.

Overall, as a mafia movie junkie, it was worth the watch. But as a fan of movies in general, it was definitely a little of a trainwreck. At that hurts me to say since I wanted to love this movie. My rating: 6/10.

P.s. If you didn’t get your La Cosa Nostra fix after this movie. I definitely recommend watching the “Gotti” HBO movie I mentioned above. It’s on YouTube in good quality.

Prospect Film Review: A Callback to Westerns but in Space

BUMBLEBEE: Will it transform your feelings about the franchise? [REVIEW]