Prospect Film Review: A Callback to Westerns but in Space4 minute read 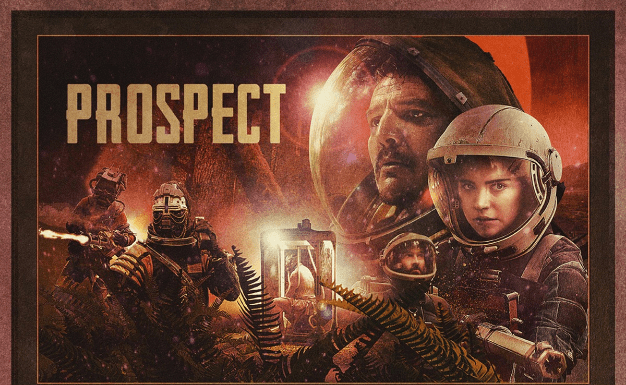 While browsing Instagram last week, I stumbled upon a film called Prospect, starring Sophie Thatcher, Jay Duplass, and Pedro Pascal. I mentioned the film to several of my friends and colleagues and it seemed that no one had heard of it. I researched it and discovered that it was a limited release only at Regal Cinemas. It seemed like a typical sci-fi film and growing up in a house that loved anything from Star Wars to Alien, I was interested, plus after Game of Thrones, I’m willing to watch anything with Pedro Pascal.

To my surprise and delight, the film blew my expectations out of the water. The film’s premise may sound simple, but it is any but. A young girl and her father are tasked with mining for rare minerals in a poisonous forest on an alien moon. After a crash landing on the moon, the girl and her father come into conflict with other people on the planet. The girl ends up being stranded with a man named Ezra and the two start a journey to escape the planet.

The film drops you into the universe with a show not tell approach. The film is shot beautifully with great detail. The film opens aboard a ship that is run down and dirty and sets the tone for the rest of the film. The planet was nothing but forest. You could hear the murkiness of it all when the characters graze the leaves and their boots squish in the mud. The designs for the space suits and weapons fit into this film world so well too. The suits were old and stained, their oxygen filters were rusted and on the brink of breaking down. The guns require winding up before firing and shoot what sounds like harpoon bolts.

Yet through all this dirt and grime, there are moments of beauty. There are shots that made the film feel as if you were watching a space documentary. The ambient music sort of moved you through these scenes as if you were sitting in the ocean, letting the waves guide you. There were frequent cuts from the characters between scenes to things in the environment, like a small alien caterpillar crawling across leaves, for example. Moments like these made the film feel immersive.

The characters are excellent, especially the girl and Ezra. Thatcher plays her character very well, showing not only the girl’s amazement and fear, but also a maturity for a child growing up in such a dark universe. Ezra, played by Pascal is dark, and weathered and has seen his fair share of the world and it shows, yet he has moments of tenderness with the girl.

The dialogue is very reminiscent of old westerns and fits perfectly. I enjoyed every scene when Ezra spoke in his worn cowboy like voice with other characters. It felt like I was watching an old treasure hunting western with my grandfather, but in space! All the archetypes were present, the greedy father, the dangerous stranger turned protector, the child drawn into this dangerous world.

It has been a long time since I’ve been so immersed in a film that fit so many genres. It has also been a while since I saw a movie and felt as if I’d only been sitting for 30 minutes. I thoroughly enjoyed the film. If you love westerns, sci-fi, or are just interested in seeing a great film, go see Prospect!

What is Kratom? Everything you need to know about mitragynine speciosa