Boxing got it wrong again The stage was set, the lights were bright and the world was watching. Boxing was set to make a comeback on this night,for the first time in years a big time fight was on prime time tv on the open cable market free for all to see.  Manny (PAC-MAN) Pacquiao was set to face Joe (The Hornet) Horn, a up and coming fighter that showed a lot of heart and talent.   So we were all set the start of the first round was under way, both fighters bounced around the ring throwing quick jabs and blocking them away, and as the final seconds ticked away we started to get a glimpse of what type of fight this was going to be. Joe Horn came at Manny Pacquiao fast and hard and the 11time Champion Pacquiao had a something for Horn, they quick counter punches. The first round ended and we all were sitting in anticipation for the round 2 . Many were thinking was this going to be the night we see a legend like Manny Pacquiao walk away and retire and pass the torch to a up and comer like Joe Horn, or was this the night we see Champ regain his form a finally get a knockout again. Then boom round two started with fast quick pace this fight was not going to go all 12 rounds for sure some one was going to be sent home early by the way the pace was set. The 3rd round came, and by this time in the fight Horn started to show rookie mistakes by winging his punches and Pacquiao took advantage of this mistake and jumped all over horn with 20 clean punches landed and also opening up a cut above the right eye of horn. This was what the boxing fans wanted to see and fast hard hitting fight with somebody starting to bleed.  By this time the 4th round was upon us and Pacquiao started to pace himself and set the tone of the fight to his liking, Horn was showing flashes of dirty tactics with quick head butts and throwing punches and following through with a quick and sneaky elbow and a one point he even caught Manny with a dirty blow to the back of the head, but that did not bother Manny Pacquiao, in true Pacquiao fashion he just shook it off and smiled and just went on with the fight. Pacquiao landed some powerful left hands to the head of horn and so did horn land some power shots. So as the round went on people were hoping for a knock out since Horn was already cut open and blood running down his face. So the fifth round came and it was almost the same result. By the 6th things got interesting. Horn’s best round of the fight. “The Hornet” landed a flush right uppercut to stun Pacquiao. Horn and Pacquiao clashed heads which caused a deep cut in the corner of Pacquiao’s head. Horn went for the cut and landed a hard right which stunned Pacquiao for a moment. By the 7th round Horn brought over that momentum from the 6th round and was landing some good shots on Pacquiao, then during the round  things got a little sketchy when Pacquiao and Horn Clashed heads again and caused another deep gash at the corner of the left side of Pacquiao’s head. Again, Horn smelled blood and rocked Pacquiao with another right hand. By the 8th  the fight was shocking everyone, because no one expected Horn to go this long against Pacquiao. Horn continued to press Pacquiao and land flush shots. The Best round Came in the 9th, just when people were going to count Manny Pacquiao out he came out strong and threw everything except the kitchen sink at Horn. Pacquiao was landing shots after power shots on Horn, the referee even threatened to stop the match if Horn did not show he can defend himself. In the 10th Manny Slowed down a bit and Horn stepped up and started bringing it. The 11th round arrived and people started to talk about the young kid Horn and his valiant efforts to go the distant with the Great Manny Pacquiao. The round showed that Pacquiao was not done, he came out landing the left and a couple power shots and making Horn miss on several occasions.  Finally the 12th round had arrived. Pacquiao was ready to seal the deal he kept on bringing the heat and landing 4 or  5 good shots with the left and even stunning Horn. Joe Horn did his best to put away Pacquiao but it was not enough, the round ended and the decision was now in the hands of the judges.

The world was waiting and many of us knew what the results was going to be. The stats were shown numerous times,  CompuBox stats, Pacquiao connected on 182 of 573 punches for 32 percent. Horn only landed 92 of 625 punches for a robust 15 percent. so it should have been a easy one to decide. 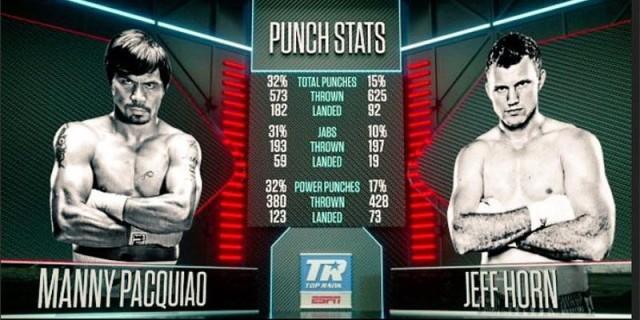 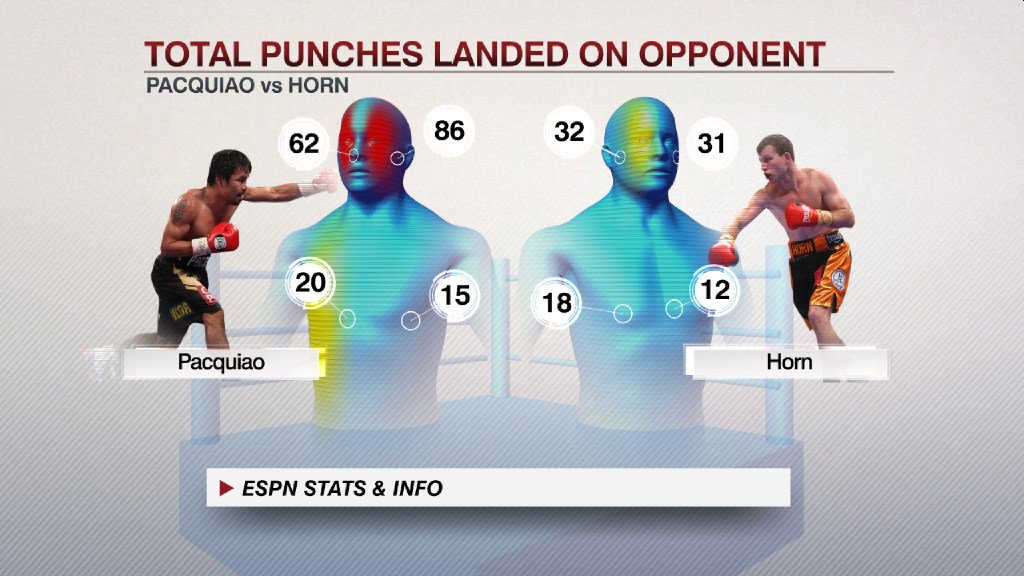 Then results were in: The judges scored the fight 117-111, 115-113 and 115-113. The win goes to Joe Horn. That did not sit well with many who watched the fight, Pacquaio was the clear winner and everyone knew, even the rest of the sports world

The results did not sit well with the Great Teddy Atlas either.

Atlas was also quoted in saying: “You see who’s landing clean, who’s just throwing, who’s not landing clean, who almost got knocked out, you can’t be that incompetent. So what else could it be? Corruption. Nothing else. I’m sorry. I love this sport, it’s the greatest sport in the world. It was a great day, a great night back where you guys are. It was great for the fans out there to get it on free TV, brought back to free TV where boxing belongs. It was great! It was great theater. There’s no theater like boxing. Nothing. But the decision stunk.”

Teddy Atlas also confronted Horn in his interview saying he did not think Horn won the fight and he asked Horn if he is a honest guy and asked him if thought he really one the fight. In true fashion Horn answered by saying he does feel like he won the the fight and that he respects Teddy Atlas’s opinion.

So at the end of the Day when boxing was supposed  to shine and make a great comeback by offering big name fights for free so the world could watch, they fell on their face by that bogus decision, by letting the home town crowd swing the vote for the home town boxer to get the win. Its Corruption at its finest.

So in closing hopefully boxing bounces back and regains its form, because what once was a great sport to watch, has become the laughing stock of the sports world.

Amazing: President Trump picks up Marine’s hat after being blown off by wind