The Raiders Leave the Land Of The Lost , For Sin CITY3 minute read

Will Football Be the same without The raiders in Oakland 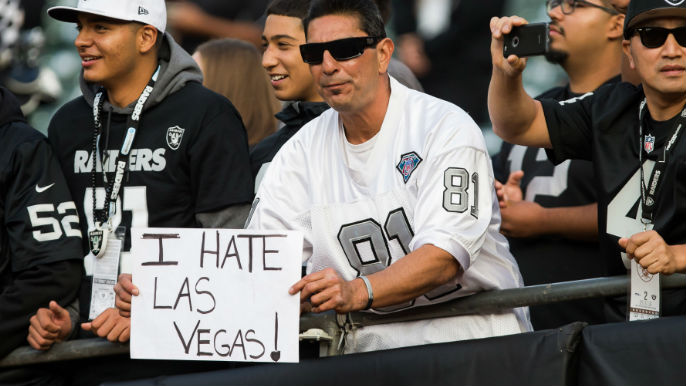 In the matter of a couple of years, we have had 3 NFL teams leave their homes and move on to new ones. First we had the St.Louis Rams move back to L.A, and become the L.A. Rams, then we had the then San Diego Chargers also move to L.A. and are now the L.A. Chargers. and Now we have the Famous Oakland Raiders moving to Las Vegas after the 31-1 vote to move the team in which only 24 votes were needed. Raiders owner Mark Davis told ESPN.com after the announcement was made Monday. “I understand [Oakland fans] will be angry and disappointed. I want them to know that I do understand that it’s emotional. Raider Nation is the greatest fan base in the world and we’re going to build something to make them proud, “I have mixed feelings; it’s very bittersweet,” Oakland mayor Libby Schaaf made a last-ditch effort to retain the Raiders on Monday The Raiders have a Unique Fan base, when you think of the Raiders, you think of Oakland and When You think of Oakland You think of the Raiders. The Oakland Raiders were the bad-boys of Football and no matter what every body respected the silver and black. The Oakland Raiders where and are the Staple of the NFL. So its is hard to wrap your mind around the idea of the Oakland Raiders moving to Las Vegas, as a football fan I feel like its a sad day for the sport, we are losing a identity of one the greatest franchises in sports history especially in NFL. There is a bright spot in this deal, with the move to Las Vegas the Raiders will bring a new look to football.with them now being in Vegas every game will be huge, and and in the spotlight, Every game the Raiders will play at home, will feel like Prime-Time it will have the same atmosphere as a big time fight. The amount of revenue that the NFL and the Raiders will game will be great and  the amount of money made from the Vegas lines will be huge. This also brings into mind how many games will be thrown or kind of shifted towards one side due to a little of greased palms.

All I have to say it a somber day for the City Of Oakland and Football fans but it  bring new light to the sport. So we will all have to sit and wait until 2018. It would be nice to see The Oakland Raiders Finish what they started last season and go all the way and give the City of Oakland one more Championship.

MEME OF THE DAY: Ben Garrison | Trump draining the swamp!

President Trump just reassured us on this