By Nicolas Bowling On Nov 6, 2016
Help us fight censorship!

The Vikings finally fell from grace, The Falcons failed to come up big, and The Seahawks and Cardinals,were boring. Week 7 showed us that Everyone has a Flaw.

The game was a joke, it was boring and dragged out. A game that was supposed to feature the leagues top two defenses, were less than great. What we got from that game was a Forgettable 6-6 tie. and a game that became the butt of all jokes this week, for the amount of miss field goals from less than 35 yards. Bruce Arians the cardinals Coach was quoted saying “YOU GET PAID TO MAKE IT.” talking about his kicker Chandler Catanzaro. Now the Cardinals are 3-3-1 and the Seahawks are 4-1-1. Lets see how this will come into play later on in the season.

The Vikings started week 7 undefeated, but that is not how they ended it. They went up against an Eagles Defense that just demolished the Vikings Offense. The Eagles defense became a terror for the Vikings QB Sam Bradford and their depleted offensive line. Bradford was sack 6 times and knocked down 16 times and Bradford fumbled a dismal 4 times.  As for the Eagles they prove to everyone that they are for real with defense that ranks 5th in the league in sacks. The Eagles‘ defense has been dominant at home this season, allowing an average of just 7.7 points and 273.7 yards to the Browns , Steelers and Vikings. Rookie quarterback Carson Wentz ,  was not as hot as he usually has been, throwing for two interceptions and mishandling a couple hand offs with Darren Sproles. Wentz did redeem himself by leading three scoring drives. So what we gather from these two games is that the Vikings so called Superman QB Sam Bradford has a Kryptonite and that is Blitzes . For the Eagles they need their Rookie QB to be a stud again if they want to win against the Cowboys Sunday night. 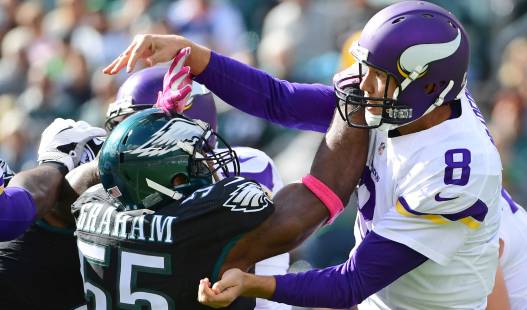 The Chargers (3-4), had lost 11 of their past 12 road games, and were on the verge to loose another ,when they  rallied from a 17-point deficit Sunday to top the Falcons in overtime, 33-30, on a 42-yard field goal by Josh Lambo. The Chargers trailed 27-10 in the second quarter and twice trailed by 10 in the fourth quarter. Philip Rivers threw for 371 yards and Melvin Gordon scored 3 touchdowns, 2 rushing and 1 via pass. With Matt Ryan being Matty Ice again the Falcons were favored to come out with the victory, but the Chargers held Matt Ryan to only 273 yards and 1 touch down, and was sacked 3 times. Even though Julio Jones had a great game with 174 yards receiving and 9 catches. It was not enough to get the W. Matt Bryan missed a critical field goal from 58 yards and the end of regulation that would of sealed the deal.

So the Chargers get the W and improve to 3-4 , and the once dominant  Atlanta Falcons, falter for the second week in a row in the last minuets of the game. So now the Falcons fall to 4-3 in a division that is a toss up.

Takeaways from Packers loss to Falcons