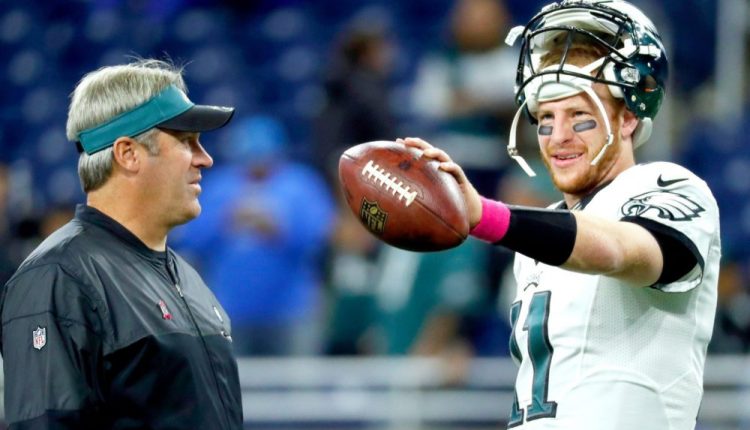 Jalen Hurts might take Wentz’s Job and Wentz has every right to want out of Philadelphia if it happens. The Arizona Cardinals had a tough match against the Philadelphia Eagles, but edged it out in the end with a 33 to 26 win.

Do you think this is leading to a nasty break up in Philly?This is a clip from The Pat McAfee Show live from Noon-3PM EST Mon-Fri.Become a member! https://ww…

The Cardinals are one foot in the playoffs talk, but can easily get knocked out of contention if not careful. Tension is what is being discussed about the Eagles right now.

Jalen Hurts played instead of Carson Wentz. He is said to be playing against the Cowboys too. This puts Wentz in an uncomfortable situation where Hurts might take his job. Granted, the Eagles have said they are intent of keeping him, but we all know that is corporate speak.

If Hurts plays well against the Cowboys, then Wentz’s job is in jeopardy.

Stephen A. Smith, Max Kellerman and Dan Orlovsky debate whether Carson Wentz’s time is up with the Philadelphia Eagles after being replaced by Jalen Hurts.#F…

The Philadelphia Eagles take on the Arizona Cardinals during Week 15 of the 2020 NFL season.Subscribe to NFL: http://j.mp/1L0bVBuCheck out our other channels…

Kyler Murray starts strong with a Larry Fitzgerald for 15 yards. They kept stringing together passes until an offensive pass interference. They started up back slow, pushed onto the nine yard line of the Eagles then lost their first chance when Hopkins got stripped of the ball inside the endzone.

Eagles try to move the chains and almost got stopped if Isaiah Simmons had caught an interception. The Cardinals just cannot get any luck.

Then luck decided to be kind to them all of a sudden as Jalen Hurts made a critical error of throwing a pass under pressure into no man’s land. That was intentional grounding, but guess what it was in the end zone.

That meant it was a safety. Arizona got their first points, 2-0 to the Cardinals.

Cardinals get swamped by the Eagles defense again and got nowhere.

They stalled each other for a good while but Murray sparked life into the Cardinals offense with a scorching pass to Maxx Williams for a gain of 42 yards.

Murray then runs that in for a touchdown. it was now 9 for Arizona to 0 for Eagles.

The Eagles responded strongly but fizzle out into punting. That punt got blocked.

The cardinals did not disappoint and got a touchdown with Murray passing to Edmond.

The Eagles start the process in trying to get back into this game.

They finally got back in with a touchdown Quez Watkins got hit on a 32 yard pass. The Cardinals push into Eagles and got stuck. They were not going without some points and kicked a field goal.

The Cardinals bad luck returns or was it just great play by Nickell Robey-Coleman as he caused Murray to fumble.

They did not fail in taking advantage as they got the touchdown through Greg Ward Jr. The game looked a little honest now.

Kyler Murray rushed down the field and reminded the Eagles they were not losing this game with a touchdown.

The response, the Eagles went in and through some back and forth, shocking penalties and recalled plays later they got a touchdown.

The Cardinals have to be looking over their shoulders at 26 to 20 against the Eagles.

The Cardinals tried to get down field, but the clock ran out on them.

The Eagles tried to clench the lead, but failed thanks to a Cardinals defense. The Cardinals did no better.

The Eagles stalled again then the Cardinals get the ball back, surged down the field then got intercepted inside the endzone a second time. You could not make this up, but props to Marcus Epps for taking it out of air.

Hurts takes advantage and sped down the field for another touchdown. They missed the field kick though and had to settle for a tie.

Murray lays the bedrock for an interesting drive where it seemed the Cardinals were stalled then out of fake punt, Andy Lee found Turner for 26 yards.

The Eagles were never surprised again after that as they stalled the Cardinals again anyways. Eagles go three and out themselves.

The Cardinals start hitting like they were running an air raid on this drive getting a touchdown.

Jalen Hurts tried to answer back the Cardinals, but failed to turned the drive over on downs.

The Cardinals tried to put it beyond all doubt, but ended up turning over on downs. The Eagles took the last chance, yet could produce nothing of worth even when they went for broke. The hail mary pass never reached Travis Fulgham.

The Cardinals in the Clutch

Arizona have that final playoff spot in sights. With two games to play, they have a good chance of clenching it.

The Eagles defense did well to stop the Cardinals a number of times, but their secondary has severed some losses like Darius Slay.

Hopkins was a beast and took full advantage of that. On another note the Cardinals defense is at best still average. They made some key stops and tried their best regardless. Still, it cannot be denied they will need to step up if they want to reach the compete in the playoffs.

Isaiah Simmons was very much present in this game, but made no great impact in his role as safety.

The Cardinals take on San Francisco 49ers Saturday and that will be a tough match for them. The 49ers may have their problems, but they have a great coach and hardworking team with great balance.

While their special teams totters in infamy, Jalen Hurts played well for a rookie. He played better than Wentz mechanically. Is he better than Wentz? Right now, no, but if we are talking stability at role of Quarterback, Hurts is the way better option the Eagles want right now.

This is why they are continuing forward with him into the Cowboy match to see if maybe they can clinch a playoff spot.

Where does that leave Carson Wentz? He is on the edge of losing his job that is for sure. Honestly Wentz’s problem can be solved with some time training, but the Eagles do not have that luxury right now.

They want a stable option now, not later. It is a sad truth.

Now, Carson Wentz has been rumored to be very unhappy with this development. With claims suggesting that he has made clear to the organization that he will not stay in Philadelphia to be a backup.

This is put a lot of pressure on the Eagle’s organization who do not want to lose Carson Wentz who was once on the rise in the NFL. But his bad mechanics have cost them too many games so far this season.

Plus it has to be asked, is Jalen Hurts the quarterback for the future? Maybe, but Wentz carries more weight in that regard as he been there already and definitely was considered one of the best. Do you want to give up a great prospect for an interesting unknown?

The Eagles have time to decide. Wentz contract will become guaranteed in March. To avoid the dead cap they would have to do it by then.