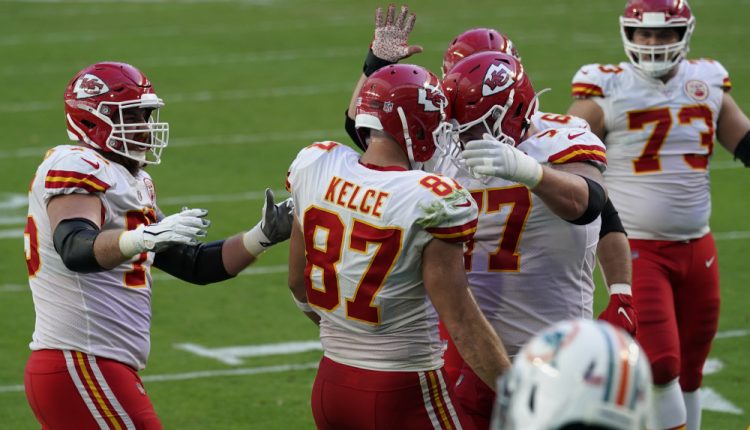 The Kansas City Chiefs were not slowing down on their way to the Super Bowl as they defeated the Miami Dolphins 33 to 28. Miami tried very hard to, their defense has been good this season. On this day they forced the golden boy into three interceptions and came close, but it was not enough.

The Kansas City Chiefs take on the Miami Dolphins during Week 14 of the 2020 NFL season.Subscribe to NFL: http://j.mp/1L0bVBuCheck out our other channels:Par…

Jay Ajaj former Philadelphia Eagle’s quarterback called the Kansas City Chiefs offense a cheat code. He might be right, because they have certainly found ways to win even when the chips are down. From their offensive weapons to their using of Mahomes in motion, they just keep finding new ways to make defenders jobs harder.

The players that showed up for the Dolphins on the day were Tua Tagovailoa who racked up 406 yards, Byron Jones, Jerome Baker got 2.5 sacks, Xavien Howard got 1 INT, Mike Gesicki.

The players that showed up for the Chief on the day were Patrick Mahomes rallied received 393 passing yards, Tyreek Hill and Travis Kelce had eight catches for 136 yards and a touchdown, Mecole Hardman had a touchdown from a punt return.

The Chiefs started off the backfoot originally, but came roaring back as per usual. The Dolphins were starting to look bare themselves with the injuries piling up. They already had their best running back sitting things out. Then for the sake of bad luck, they lost three receivers, a safety and an offensive linesman.

The offensive side of the ball took a beating today for Dolphins with so many injuries and it will be interesting how they manage this.

The Dolphins started the game, but failed to get anything on their first drive.

Mahomes tried to get things going with a string of passes to Edward-Helshire and Le’Veon Bell, but the Dolphins defense made sure he would get no touchdown when Andrew Van Ginkel deflected the pass and Byron Jones caught it for the interception.

Dolphins failed to take advantage and turned over the ball. Mahomes almost fumbled a snap, but he secured it before Dolphins got their hands on it.

Mahomes made some plays then did his worst habit of running backward only to be sacked by Jerome Baker for a 30-yard loss.

The Dolphins received the punt and started their drive slow. Soon enough, tight end Mike Gesicki and the offense turned up as they pushed down the field.

Tagovailoa got Gesicki for the touchdown. It was now Dolphins 7 to 0.

The Chiefs tried to respond and the answer ended up being safety Eric Rowe’s interception of Mahomes.

The Dolphins ran out the clock.

Tagovailoa raced down the field, with the Chiefs defense forcing the Dolphins to kick a field goal.

The Chiefs fired all cylinders. Kelce for 21 yards, Safety Bobby McCain got brought off field on that first play. Tyreek Hill finally got his first touch and it was a 32 yard touchdown. The Dolphins were at 10 with the Chiefs staring down their back at 7.

Dolphins struggled against a reinvigorated Chiefs defense and had to punt.

The Dolphins defense made the Chiefs pay for the score and forced a three and out leading to a punt.

Tagovailoa tried to move the chains. The Chiefs defense stopped him at every turn. On third and 7, under immense pressure Tagovailoa threw deep. Grant failed to catch it as the ball bounced off the chest and Chief’s Tyrann Mathieu sniped it out of the air.

Mahomes worked his way down the field and finished what he started throwing to Kelce for a touchdown. Now, the Chiefs were up 14 to the Dolphins 10.

Tagovailoa tried to speed down the field for a touchdown before the half. Frank Clark sack prevented that and the clock expired with the Dolphins on second and 1.

Edward-Helaire opened catching a flat pass then fought for a 26-yard gain. Safety Bobby McCain got brought off again with a suspected injury with his right ankle. Mahomes then followed that up with a pass to Hill for a 44 yard touchdown.

The Dolphins struggled to get anything going and had to punt. Then the Chiefs returned it 67 yards for a touchdown. Talk about bad luck.

The Kansas City Chiefs were up 28 to the Dolphins 10.

Miami Dolphins were stifled and punted.

The Chiefs looked for another touchdown, but the Dolphins made a play when Byron Jones caused the ball carrier to fumble with linebacker Kamu Grugier-Hill recovering.

Tagovailoa tried to make things happen, but recovering the ball so close to your goalline proved the nail in their coffin. The Chiefs made sure to get a score by sacking Tagovailoa in his own end zone for a safety.

The Kansas City Chiefs were at 30, while the Miami Dolphins lingered at 10.

The Dolphins sweated the Chiefs and forced a three and out.

Tagovailoa rallied the troops for a good string of medium passes. A sack on the third down led to the punt.

Mahomes almost got a touchdown, but right next to the endzone Xavien Howard made an exceptional play grabbing the pass before it reached Hill.

Tagovailoa surged down the field with the help of Gesicki and a mix of other receivers. Gesicki sealed the deal with a 29 yard touchdown.

The Chiefs were sweating at 30 with the Dolphins chasing at 17.

The Dolphins stalled the Chiefs and forced another three and out.

Tagovailoa with help from the Chiefs frequent penalties cruised down the field for another touchdown now only 6 points behind the Super Bowl champions.

Kansas City Chiefs tried to keep the ball and went down the field slowly. They kicked a field goal and made it just a little harder for the Dolphins.

The Chiefs were confident at 33 with the Dolphins looking grim at 24.

Miami sped down the field, but in desperateness went for a kick which was good. The Onside kick came soon after, but the Chiefs predicted that and promptly took away the chance from Miami.

The Chiefs knelt to kill the clock.

The offense must have a cheat code, because this Mahomes led offense overcame a 10 point deficit and a defense that was good enough to force four turnovers to win.

They are rushing, whether they are passing, they are top notch in all areas. Granted, they tend to struggle at first against good defenses. The Chiefs have the versatility and determination to adjust to any defense and it really makes them a frightening team to face against.

Kansas City have 12 wins and have a great record coming in from last season where they had consistent 12 plus win seasons.

Chiefs chairman Clark Hunt said this was the goal they have been working towards. “It’s a great accomplishment, fifth time in a row. One of our goals going back a decade or so was to build a team that could consistently compete for championships, and Andy and his staff have done a great job. There’s a lot still in front of us, but today was a big step.”

Seriously though, we understand Patrick Mahomes play style. He likes to extend the play. Giving up on the play is not something he would do. To run back 30 yards in an effort to extend the play, that is ludicrous.

No, no you just cannot do things like that. It could have almost cost him and his team the game. Still, he is Mahomes, his talent and effort makes up for it. His team is talented and just as determined as he is.

20 points down, not problem, they are known for coming back from deficits. They do it so often, it has become a fancy narrative for them to do it. They will never have a morale problem in such a case.

Kansas City will meet New Orleans next. The New Orleans defense is good, the Chiefs will struggle, but they will give the Saints a good fight. This match will be epic considering both teams are Super Bowl bound and kicking to prove who is top dog.

The Dolphins are a Great Team, But Their Playoffs Look Grim

Even if Miami get to the playoffs, which they are looking good to do, Tagovailoa will struggle without an effective offensive core. He lost most of his top receivers and running backs.

He has Gesicki and the defense is still solid. But Gesicki will most likely get double coverage now since he is the only threat on Miami. Also, it came off the field early due to a suspected injury. Hopefully for the Dolphins it is nothing serious. Grant provides his speed, but his catching ability is poor.

Still, if it is any solace Tagovailoa is improving. He improved dramatically in the fourth quarter and was able to diagnose their blitzing and pressure. That shows a level of resoluteness that he will need as a quarterback.

He can lift this team up if given the chance and I believe he can definitely do that. It will be difficult though and he will have to lean on his defense to do the chunk of the work in the coming weeks. But it does not matter how many times the defense makes turnovers if you cannot take advantage of it.

The Dolphins will go up against the Patriots next. A defensive battle for sure. I give Miami the edge as I do not think Cam will improve all of a sudden or they have an effective strategy for the Miami defense.

Mitch Trubisky And The Chicago Bears