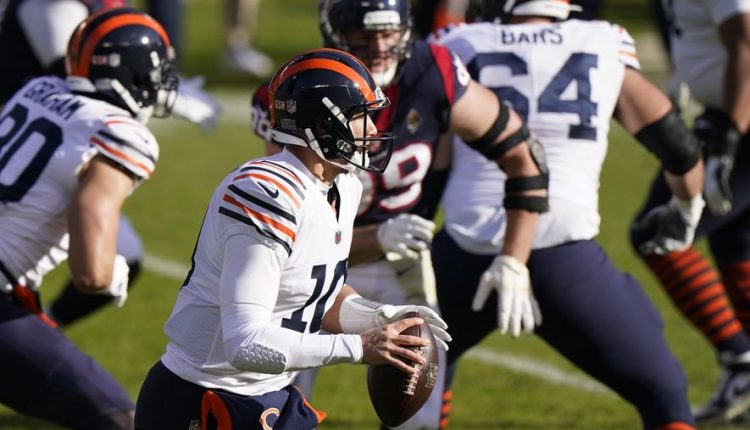 The Chicago Bears have beaten the Houston Texans 36 to 7 with Trubisky beating the label that has been tacked on him of not being good enough. It felt like a forgone conclusion for two teams that should be at the top of their conferences. Well, at least the Bears broke their losing streak by beating a team that is literally at their lowest point in a long time.

The Houston Texans take on the Chicago Bears during Week 14 of the 2020 NFL season.Subscribe to NFL: http://j.mp/1L0bVBuCheck out our other channels:Para más…

The only other team in a lower state is the Jets. Yes, decisions, many bad decisions led to these two teams becoming terrible teams when they easily could have became great.

The Chicago Bears needed something to be happy about. They made sure to serve their fans one good thing before they go out into the night. The Texans have been in a bad state this season and have struggled to get to some normalcy after the firing of O’Brien.

The Texans missed Brandin Cooks and David Johnson. Essential pieces to their offence, so not surprisingly their offense barely put up a fight.

The Bears racked up seven sacks. Khalil Mack made a fantastic sack of Watson in the end zone for a safety.

It was a slaughter with an 80-yard touchdown run executed by David Montgomery and Trubisky throwing three touchdown passes in the first half..

The players that showed up for the Bears on the day were Mitch Trubisky got 22 out of 33 passes for 267 yards, three touchdowns,, Allen Robinson 123 had receiving yards on nine receptions, David Montgomery totaled 155 yards in all, so 113 rushing yards, 42 receiving yards, Khalil Mack, Roquan Smith led the Bears with two sacks, 12 tackles.

The Texans started poorly when they had to punt. That punt was a poor punt as it went 26 yards and the Bears picked up from there getting a touchdown.

Trubisky did his duty and found Jimmy Graham for the second touchdown.

The Texans finally get on the board thanks to Watson and Keke Coutee.

Defensive lineman Bilal Nichols sacked Watson. A loss of 10 yards preceded Khalil Mack’s fantastic play, a play where Khalil Mack made a sack in the end zone, getting a safety.

Rookie Darnell Mooney was the next hopeful as he caught a 12-yard touchdown pass.

But it was not over, as with 8 seconds to spare Mitch Trubisky sent a pass to Allen Robinson for another touchdown.

The Bears drove down the field and got into position for their kicker to do the heavy lifting. Watson got possibly injured, but knowing Watson he returned on the subsequent drive once they realize it was not serious.

The Texans almost had another touchdown, but on review they called it back.

Deshaun Watson got sacked again on a fourth down which led to the Bears getting the ball.

They just let their kicker pad up the stats for today. Bears kicker Cairo Santos made the next kick instead of going down the whole field.

The Wasting of Talent in Chicago

Mitch Trubisky looked good for one of the few times in his career. A career that should not have lasted this long, but what can we say the Bears love him. Granted, they tend to drift between him and Foles from time to time, but deep down they love Trubisky.

Honestly, Trubisky is not that good of a quarterback. Not enough to raise a team’s ceiling. He is more likely to pull his team down. Actually, that is what he is used to doing.

This win is just his team facing a down and out opponent, against capable opposition the Bears falter like clueless animals into a pit trap.

Should they give up on Trubisky? If they gave up on him long ago they would have probably been to the Super Bowl. The Bears defense is that fantastic. Give them a good quarterback and they will destroy teams on the way there.

Trubisky is not good enough.

The team is great though. They have a reliable kicker in Cairo Santos who has a 18 field goal streak. They have Khalil Mack assisting the pass rush with consistent and brutal sacks every game. This game he caused a fumble and recovered it.

They had a solid and good defense and they are working with one of the most error prone quarterback in the league. He won this game, sure, but it was against the Texans.

It is not to say the team cannot carry him, they can. But Trubisky is so bad they have to climb mountains to do it.

Still, their last two matches were not good either for the defense. Aaron Rodgers to threw four touchdowns, Matthew Stafford got 402 passing yards and three touchdowns.

The defense was not playing like they wanted to win. Motivation is difficult for them when they cannot trust the offense.

Maybe they can believe in the team, what they are trying to achieve again. Trubisky has to improve, by a lot.

Now regarding Foles, when Trubisky was benched and Foles was chosen. The offense was changed notably and it did not go well. So much so Trubisky was put back in.

They had changed to a shotgun heavy offense and the Bears never had the players who could pull it off. Thinking about, it might be best to accept Trubisky for what he cannot do and accept him for what he can do.

Make a more systemic scheme that takes advantage of his good traits. His decision making is poor, take the ball more out of his hand and place it into the hands of talented teammates. Make him a better game manager than he was before.

He is leading the offense too much in my opinion and he is not Brett Favre.

Also there are fans complaining about how they will get a Trey Lance thanks to this win. This win makes it hard unless some other matches go their way for them to get a top ten draft pick.

I said it before, the Bears love Trubisky. I do not think the organization was trying to tank or cares to, yet.

Quarterback Mitchell Trubisky meets with the media following the Bears’ 36-7 win over the Houston Texans.Subscribe to the Bears YT Channel: http://chgobrs.co…

The Texans Need a Recharge

T. J. Watt did say he did not want a rebuild and I cannot blame him. He joined a team with a talented quarterback. A great receiver in Hopkins, other great pieces in defense and offense, the feeling was that they were going to the Super Bowl.

That was what they were going to work towards. Well, life hits you and it hits you hard. O’Brien ruined that chance and shut that Playoff window for now. It can be reopened later. The problem is that will take at least two drafts, two years T.J. Watt does not have.

Him staying at the Houston Texans is highly unlikely. So they will expect to lose him and many others who feel that way. Deshaun Watson has more years on his self, so he can stay for that rebuild.

Thinking about it, offense is where they need the most help. Yes, they should replace some pieces leaving in defense and cover weak areas there. But the offensive line and receiving core need players who can an impact on day one.

So that is where they should draft help. With some players expected to leave they will offload some big contracts and finally spread their wings a bit for next season.

Still, what will the team look like in three years? Pretty different I reckon, but it is worth looking forward to.

The Kansas City Chiefs Are Dominating on Cruise Control