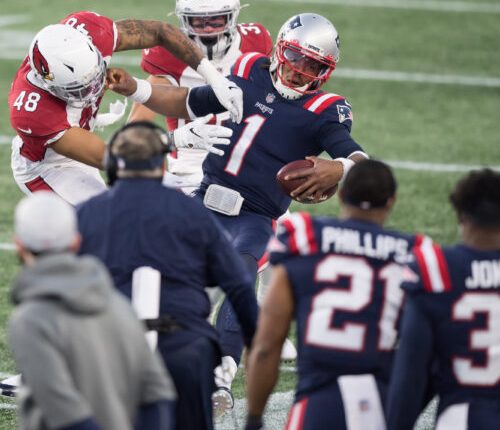 The Patriots are having an odd period in their history. It is the first time the Patriots are not dominating their division and NFL football in general. If they win now, it is usually a close win. It was the same in this case against the Cardinals. They won 20 to 17.

The Arizona Cardinals take on the New England Patriots during Week 12 of the 2020 NFL season.Subscribe to NFL: http://j.mp/1L0bVBuCheck out our other channel…

The players that showed up for the Patriots on the day were Adam Butler got five tackles and one sack, James White got 2 touchdowns, Nick Folk, Stephon Gilmore.

With the Patriots at 5 wins to 6 losses, the playoffs seem like a dream. I do not think Belichick cares much about that considering the circumstances. Cam Newton is more concerning right now, because his passing was not up to par in this match.

What’s Happening with the Patriots?

Cam Newton only got half his passes connecting, 9 out of 18 to be exact. This was not good, but the Cardinals defense is not exactly a bad defense. They just meddling between average and good on chance days.

So they did well to force the Patriots to run the ball more often which was their downfall, because the Cardinals are not good at stopping the run enough to prevent Folk sailing the ball through the uprights on a number of occasions.

That makes the Cardinals not a great offense, but a good defense. You would rather have a kick against you, than a touchdown. If only the Cardinals offense was just as good.

Cam’s running game has been what he has been known for, but he used to be rather consistent passer when he played for Carolina. So, I do not think that cannot be blamed solely on him.

But throwing two interceptions is bad. Miscommunication maybe? But we are leaning towards Cam Newton trying to make plays he does not need to make.

Forcing the ball in coverage works, sometimes, but there is a reason why you throw away the ball in such situations. Then again his offense is not top of the line, so he has to make lemonade out of rocks.

With receivers like Olszewski, Cam’s chances are not looking so hot. N’Keal Harry was also missing in action as he got no catches and sometimes Cam just never saw him when Harry was looking good for a catch.

The offense was just bad all round.

Then again great quarterbacks make greatness out of average.

His final drive was his best, as some luck was thrown his way. On a run, he drew a penalty on the defense which helped cut down rush to the end zone.

The defense did most of the heavy lifting for Cam Newton. Gilmore stifled DeAndre Hopkins all game and held him to only 55 receiving yards. Butler’s deflection led to an interception, his key sack led to a punt. Adam Butler was just a monster for the Patriots that day.

Nick Folk was perfect for the Patriots, a lot of their points came from him and he sealed the victory for them with a kick in the end. Their next game will be against the LA Chargers. A game they are expected to win.

But the LA Chargers defense known for their suppressing coverage play might give Cam Newton a warm time. The Chargers defense only problem is complacency, they tend to let their foot off the gas at times. Justin Herbert has been statistically great, but against good defenses he struggles to win games.

So, expect the Patriots to win this one, if all goes to plan.

The Cardinals Might Need Some Clarity and Better Team Management.

The Arizona Cardinals are sweating on the possibility of losing their quarterback. The Bengals lost Joe Burrow, the Giants lost Daniel Jones, the Cardinals quarterback has been having shoulder issues and has not done well in this match to showcase.

Well if it is any consolidation, he is doing better than Cam Newton at 23 out of 34, 170 passing yards. Funnily enough the Cardinals are supposed to be Super Bowl bound team, but they have not proven more than being a dark horse at this point.

They started out great, but have been racking up losses aplenty recently against the teams that matter. You know your Patriots and Seahawks.

Their next match will be against the Rams, a tough opponent to beat at any time. They have a good offense, but it is not clicking exactly the way it should, at least, not the way it was promised.

The defense was really what was expected to be exceptional, but the pieces have still not come together especially with injuries plaguing some roles. Vance Joseph has more work to do to bring this defense up to those lofty promises.

Side note, Isaiah Simmons’ is still struggling to adjust. He cannot make his talent shine through, yet he had to foul Newton? That foul led to the 50-yard game winning kick by Nick Folk. He has to go back to the locker room with that fact rooted in the back of his head.

That and all the coaching staff’s heads, they will certainly remember that mistake amongst other mistakes he committed this season.

That brings up a question, why does the team commit so many fouls? Indiscipline rampant, no, I would not say that. It’s a just inefficiency and complacency really, a lot of people are not doing their job at the highest level anymore.

Right now, Zane Gonzalez and the coach are getting all the flack. Not the players who keep racking up a long list penalties with personal fouls and pre-snap penalties becoming common. No one is being held accountable, so they keep doing it. That is what it is.

Zane Gonzalez is among a number of kickers that are disappointing this season. Also Kliff Kingsbury, his hire was supposed to usher in a high flying air raid like offense. What we been getting is your typical offense.

Kyle should be cooking like Russel, slaughtering defenses like Josh Allen, burying teams like Joe Burrow. The offense has just been fine, fine is good, but it is not what was promised.

Kliff Kingbury is slowly becoming known for his unfulfilled promises. In this game he is also becoming known for some very conservative play calling which does not fit his air raid, style he developed in college and also shows he is insecure about his job.

Though it could be said the reason he was running the ball so much in this match was because he did not want to aggravate Murry’s shoulder too much. Honorable thing, but that only counts for this match, what about the earlier matches?

So, yes, it has become a pattern we have seen from the coach.

Fans would love to see Chris Streveler more on the field, but he has not been used. If Murry was having problems, maybe utilize Streveler in those situations. He would have added that threat to the run and actually give Murry some room to breathe when he gets a snap.

Opposing teams are realizing the Cardinals offense struggles without Murry’s rushing prowess. That is what the Patriots do well, they challenge your best talent. They need options and answers for that.

The NFL Struggles to contain Covid-19