The Chiefs Were Handed Their First Humbling Lost5 minute read

Should fans be concerned? 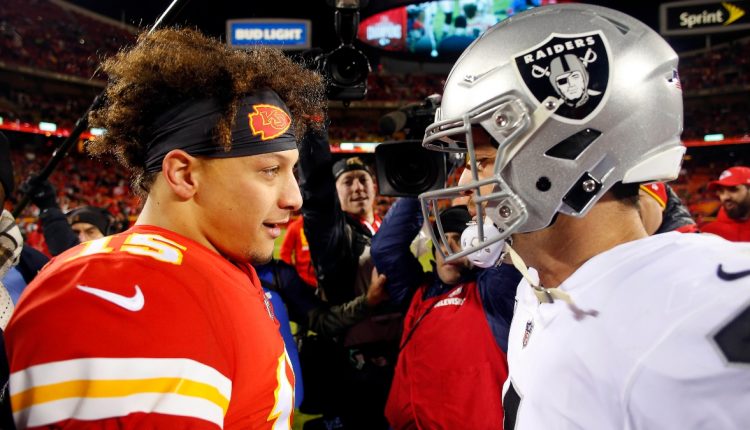 The Las Vegas Raiders take on the Kansas City Chiefs during Week 5 of the 2020 NFL season. Subscribe to NFL: http://j.mp/1L0bVBu Check out our other channels…

And they did, the Raiders beat the Chiefs 40-32. A close thrilling affair that is worthy watching before you kick the bucket.

How the Raiders SHOCKED the Chiefs at Arrowhead | Baldy Breakdowns

The Las Vegas Raiders put up 490 yards of total offense.

The players that showed up for the Raiders on the day were, Derek Carr who threw for 347 yards, three touchdowns, Josh Jacobs had 23 carries, 77 yards, 2 TDs, Henry Ruggs had 2 catches, 118 receiving yards, 1 TD.

The players that showed up for the Chiefs on the day were, Clyde Edwards-Helaire who had 10 carries for 40 yards and Travis Kelce who had 8 catches, 108 yards, 1 TD

The Chiefs had some bad luck as Tyreek Hill deep attempt was called back due to a penalty. The Raiders never got complacent. They scored through a 75-yard drive. Mahomes hit them back with 88-yard drive before the first quarter was done.

The Raiders defense slowed down Patrick Mahomes all game.

But the Chiefs defense was not sleeping either as Bashaud Breeland intercepted Derek Carr.

Carr responded ferociously, getting three touchdowns before half-time. Nelson Agholor got a 59-yard catch in one drive.

Sammy Watkins brought up the Chiefs’ lead to 11. Raider’s tight end Darren Waller delivered with a touchdown to keep the Chiefs at bay.

Rookie wide receiver Henry Ruggs made the biggest play of his young career. Ruggs caught Carr’s throw and ran for a 72-yard touchdown giving the Raiders a 24-21 lead.

The Chiefs drove down the field and before the half tied the game with a Harrison Butker’s kick.

The burned much of the clock in the third quarter with a long drive Josh Jacobs got the touchdown at the end of that one. The missed extra-point attempt gave the Chiefs hope. They were only down 30-24.

Maxx Crosby’s sack of Mahomes gave the Raiders the ball. Carr drove down the field and found Hunter Renfrow for a huge 42-yard push into Chiefs territory. Carlson’s field goal gave the Raiders a nine-point lead.

Kansas City with the possible lost breathing down their necks got more aggressive but regretted it, on their fourth-and-7 from their own 28, Jeff Heath intercepted Mahomes pass.

Jacobs got his second touchdown putting Las Vegas over 40 points on the day. Mahomes led a valiant effort getting a touchdown and the two-point attempt.

The two minute warning loomed. Jon Gruden made a gutsy call on fourth-and-one. Carr took advantage and got a first down before securing the Raiders win.

Do the Chiefs rely on Patrick Mahomes too much? First Take debates

Granted, Mahomes was still making those off-platform jaw-dropper passes. The receiver core struggled against a disciplined defense and naturally failed to convert on many chances. We saw cracks of this in the Chargers use of cover three principles to stall the Chiefs attacking prowess and the Patriots also did well against the offense limiting it just as well.

The Chief defense was not any better.

Carr got too many great throws all game. Some would say that bad luck plagued the Chiefs. Yes, that can be true, but what is also true is that all those points the Raiders put up was not luck. That was a team outplaying their defense.

No amount of denial can make that look any better. Are the Chiefs are a bad team, no, they are one of the best teams in the league. People just know how to beat them now. Pressure, deep coverage to stifle their deep options, wash, rinse, repeat, the Chargers could not sustain that the whole game, while the Patriots made too many mistakes themselves.

The Raiders barely made any mistakes hence the win. Nothing special about that, also relying too much on Mahomes to save them will be their downfall.

The Chiefs lost in the line of scrimmage on offense and defense.

The Raiders are building up their team and with Henry Ruggs coming into his own so soon. The Raiders should be able to build themselves into a great team.

Keleche Osemele will be missed. He was essential to that offensive line of the Chiefs. Mahomes noted the high standards the Chiefs are held to, for he said as much about his superman status and how it affected the team’s work ethic. “We got to go back and really look at ourselves in the mirror… And really not rely on these crazy plays we’re I’m scrambling around throwing these shots.”