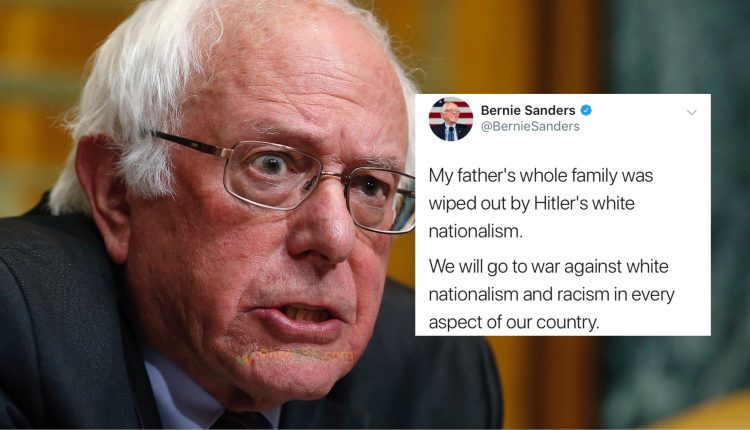 Bernie Sanders tweeted something earlier that may seem innocent or even righteous at first glance, however after dissecting it further, it’s quite disturbing.

One of the new talking points for the left is white nationalism and white supremacy. According to them, white men are the number one threat to the United States and racism is spiraling out of control.

The villainizing of white people is growing everyday. Sadly, the term “racist” and “white supremacist” are thrown around so much now, the words have lost all meaning.

Not only is the President called a racist and white supremacist everyday without any evidence of such, but apparently anyone who supports him is too.

Bernie Sanders has called the President a racist – amongst other terrible names – over and over again.

What’s crazy is that we have a president who is a racist, a sexist, a xenophobe and a fraud. We are going to bring people together and not only defeat Trump but transform the economic and political life of this country. Say you’re in: https://t.co/rxqbjJJKv3 https://t.co/HoJG0Rlwq1

In his tweet today, he said he is “going to war” against racism. He is clearly fanning the blames of violence against the President and his supporters.

But you label Trump and his supporters as white nationalists, so you are literally threatening war against the President and 63 million voters. @SecretService @FBI I believe Bernie Sanders is making terroristic threats. https://t.co/A50CyJL1VV

Another thing Bernie and his Democrat colleagues love to claim is that Trump is using “dangerous” rhetoric. But the only ones being constantly attacked is Trump supporters and law enforcement. The President’s words aren’t inciting violence, that’s the Democrats. Yet, the media is silent. The double standard is insane.

639 Acts of Violence From The Left on Trump Supporters https://t.co/u8T0cCaHqo

Now before you think this is crazy or “reaching”, realize that this is exactly what they do to Trump. Calling his words “dog-whistles for white supremacists”.

Joe Biden on Wednesday accused President Donald Trump of “fanning the flames of white supremacy” in his most aggressive attack yet on the character of the man he would like to defeat in 2020. (Aug.

If a taken out of context quote saying their were good people on both sides is “fanning the flames of white supremacy”, then “going to war” most certainly fans the flames of violence.

@BernieSanders Change “white nationalism” with “Muslim” and that Trump tweeted this. It would be OUTRAGE!

The “Real Side” podcast is coming back!

A list of Clinton associates who died very strangely