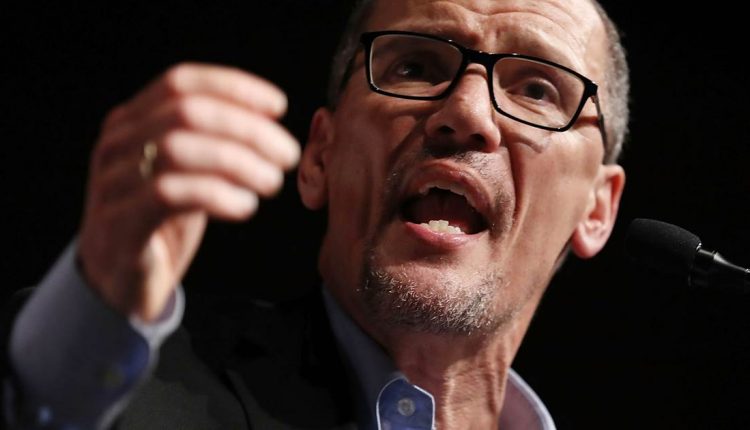 The Chairmen of the Democratic National Committee (DNC) Tom Perez spoke before the first round of the Democratic debates tonight. Of course, he took the time to take shots at President Trump and his recent tweets calling out Congressmen Elijah Cummings of Baltimore.

Here are the original tweets in case you missed them…

Rep, Elijah Cummings has been a brutal bully, shouting and screaming at the great men & women of Border Patrol about conditions at the Southern Border, when actually his Baltimore district is FAR WORSE and more dangerous. His district is considered the Worst in the USA……

Why is so much money sent to the Elijah Cummings district when it is considered the worst run and most dangerous anywhere in the United States. No human being would want to live there. Where is all this money going? How much is stolen? Investigate this corrupt mess immediately!

Of course, the left called Trump’s tweets “racist” despite having no mention of race anywhere in his tweet. Nor did the President call for any sort of violence or action in his tweets.

There is nothing racist in stating plainly what most people already know, that Elijah Cummings has done a terrible job for the people of his district, and of Baltimore itself. Dems always play the race card when they are unable to win with facts. Shame!

Despite that, the Democrats and the Democrat-run media say that not only is the President racist because of his tweets calling out a number of members of Congress and even saying he’s inciting violence with his words!

Tom Perez – the DNC Chairmen – says that it shouldn’t come as a surprise if people start to take the President’s words and turn them into action.

We believe in Baltimore – and cities like Baltimore,” DNC Chairman Tom Perez says about Pres. Trump’s attack on Rep. Cummings. “When you use divisive words, it should not come as a surprise when people put those hate-fueled words into action.” https://t.co/QYCJTkTsn1 https://t.co/9PxptGfQBv

We believe in Baltimore, and cities like Baltimore! We believe in Elijah Cummings. We believe those attacks are mean-spirited, they’re racially motivated. And you know what, people say sticks and stones can break my bones but words will never hurt me. When you use divisive words it should not come as a surprise when people put those hate-fueled words into action.” Perez goes on to say, “When you set the tone at the top, it effects things. That’s not who we are as a nation.”

Was Congresswoman Maxine Waters setting a nice tone when she said to harass Trump supporters (clip below). The hypocrisy is absolutely mind blowing with the Democrats. No where in Trump’s tweets were anything “racist” or even a call to action. However, the Democrats – even high ranking Dems – continually try to incite violence. Here are just a few quick examples.

They try so hard to twist, rearrange, manipulate and look for a “deeper meaning” or a “dog whistle” in Trump’s words to try and find racism or a call for violence when the Democrats literally just come out and say it.