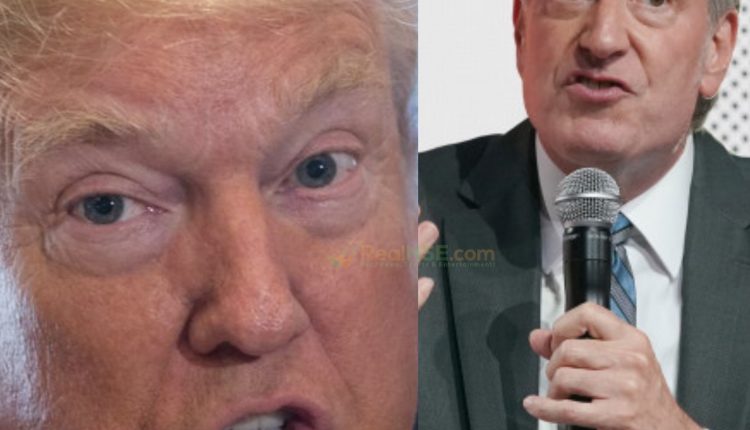 It seems Democrat Mayor and Presidential candidate Bill de Blasio and President Trump’s feud is alive and well. Now the NY mayor says the President will not be welcomed back after his term(s) end.

President Trump was on Hannity last night and took shots at the New York mayor for the recent attacks on NY police officers calling it a “total disgrace”.

What took place was completely unacceptable, and will not be tolerated. Bill de Blasio should act immediately!

De Blasio immediately shot back at the President with a pair of Tweets of his own.

@realDonaldTrump knows NOTHING about his hometown. He never lived a real New York City life. He should get off Twitter and stick to what he’s good at: watching TV when he claims to be working.

Sean Hannity asked the President last night during his exclusive interview about the situation again.

”They don’t like him, they don’t respect him,” Trump said of de Blasio’s relationship with the NYPD. The president cited numerous occasions where officers have turned their backs on de Blasio over his unwillingness to defend police officers against criticism by Black Lives Matter advocates.

De Blasio responded by sharing a clip from his discussion with Buzzfeed after the President’s interview aired by saying Trump doesn’t know the New York lifestyle and he will not be welcomed back after his term(s) end.

”Because he doesn’t understand New York City.” de Blasio said ”And when his presidency is over really soon, he will not be welcome back in New York City.”

Donald Trump seems to have a lot to say about New York City lately. So I issued him a challenge last night @BuzzFeed. https://t.co/q3TB7d9pNO

It’s quite ironic that de Blasio would tell an American they are not welcome to their city when back in 2017 he called President Trump’s travel ban “un-American”.