The big difference between the left and right. 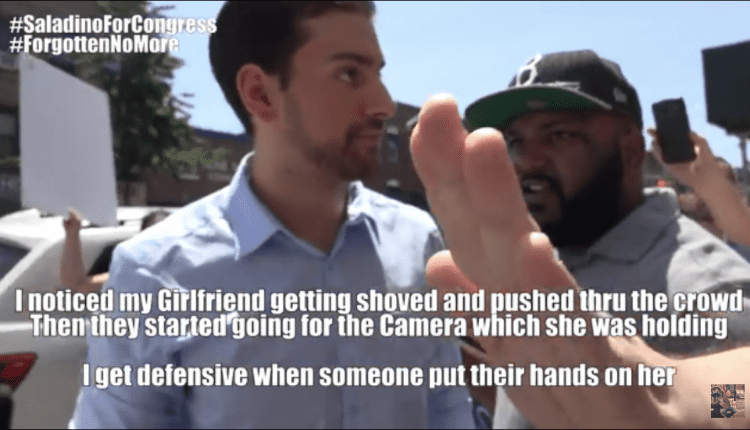 ASSAULTED at PROTEST in NYC

Over the weekend New York Republican Congressional Candidate Joseph Saladino – better known as Joey Salads – attended the “Tell Max Rose: Remove Ilhan Omar from HFC ASAP” rally in Brooklyn. The point of the rally was to send a message to current New York Congressman Max Rose to stand up to anti-Semitism.

Rose, who Saladino will be challenging if he wins the Republican nomination, is of Jewish descent. Yet he has not made a stand against his fellow New York Congresswoman Ilhan Omar who has made several anti-Semitic remarks. In fact, Rose even apologized for Omar instead of calling her out and standing with the Jewish people of New York.

Along with the protesters standing against Omar, there were liberal counter-protesters that stood with her.

Saladino went over to the pro-Omar side to start a dialogue and hear them out. Saladino approached one of the protestors that were holding a sign that read ‘Do You Know What AIPAC does ya doof?’ and asked if he can speak with him. The guy said “ok” and seemed willing to talk. That was until another guy told him what sounded like “no no no no I don’t think so”, but due to the other protesters chanting “2-4-6-8 end anti-Muslim hate” it’s difficult to hear the man clearly.

It seemed the man was uncomfortable with his friend speaking with Joey after seeing the camera and even asked: “what entity are you with?”. Joey’s girlfriend Gila who also is his camera-girl responded: “we’re not journalists”. The men asked: ”who are you”, Joey told them “Joey Salads”. They started laughing and one even told Joey to “f*ck off”. Joey remained calm and tried to explain to them he just wants to hear their side.

“Look, I want to be the Congressman for all of NY-11, and that means speaking with people who I don’t agree with.” Saladino told the protesters.

Shortly there after the leftist crowd became very agitated. One person off camera shoves Gila and tries to get the camera out of her hands. Joey wasn’t having it. He immediately came to her defense and told the man “don’t do that. That’s my girlfriend if you touch her I’ll f*ck you up”.

After walking away from the crazed mob, protesters continued to follow Joey and scream at him. Shortly after that Joey mingled with civilians and gained some new supporters.

The NYC Republican Party needs better leadership, there is no one who can create a movement and get people involved. I am here to help. https://t.co/7KlasUYgff