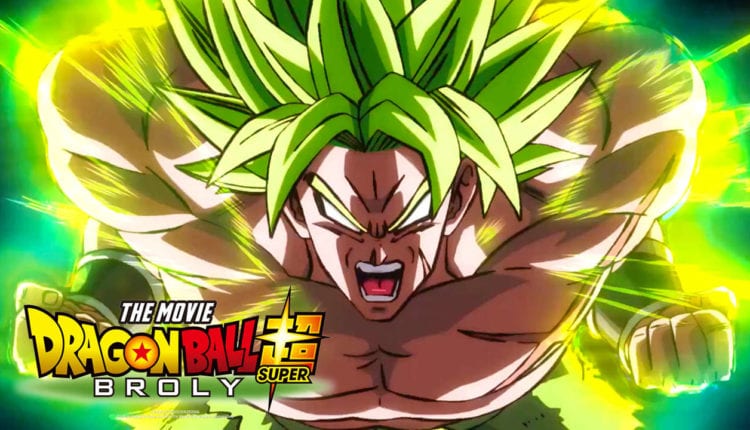 The latest Dragon Ball Super movie: Broly comes to theaters in North America in January 2019 dubbed! Stay tuned for future updates of the movie about the strongest Saiyans.

I was extremely disappointed when I heard that the new Dragon Ball animated film, Dragon Ball Super: Broly, was only playing for 1 day in theaters. I watched the first two movies immediately when they were released as well as the show weekly until its finale last year. Growing up, every morning before school, I would watch Dragon Ball Z until I heard the bus pull up outside. That show started my love for anime, which helped build my writing subjects and style for fiction.

Luckily, the release was so popular that the theaters extended its release and I was still able to see it. The film made $10 Million during its opening weekend, which amazed me. I didn’t think that many people knew about it or had interest in seeing it, but every showing was sold out. That shouldn’t’ surprise me though because the popularity of anime has been growing over the last few years.

The film was a mashup of old and new, a sort of retelling and origin story for the characters. The film takes place after the main series and is a direct sequel. Since the film opens with events from before the shows start, newcomers can jump right into the film without really knowing anything.

The film opens with a retelling of the Saiyan races destruction as well as a new origin for Broly, the titled character. The story then shifts to the main heroes, Goku and Vegeta, as they search for the magical grant wishing Dragon Balls that were stolen. Things are tied together and Broly is brought to Earth to fight the two heroes and the rest of the film is a giant slug fest.

The animation of the film was top notch. It kept the original style of the series but adds its own flair. The characters were drawn with rough lines, giving them the slight look of sketches. The animation was extremely fluid. The film looked like a painting in motion. The fight scene, which is the main draw of the series, took up almost half the movie and it was spectacular!

The fight switched from characters as they tested their might against Broly, who grew stronger and stronger, forcing the heroes to fight their hardest. The fight was animated so visually explosive. The theater shook as punches landed and the scenery exploded. Punches were thrown in first person then zoomed out to third person. You could feel everything.

And while the fighting was spectacular, the characters themselves were also great. Goku and Vegeta were just like they always were. Goku was light-hearted and joked and just wanted to fight for fun. Vegeta just wanted to prove his strength but showed tenderness when he was worried about his wife. Freza showed a more comical side that played well with his villainy. The most impressive character by far was Broly though. He was a sympathetic character that displayed moments of such deep emotion and wonder. This was a spectacular reboot and a film for him.

This movie made me extremely happy and gives me hope that more anime movies based on different series will be in theaters and some day my children will be able to experience this. I highly recommend this film to anyone, even if they aren’t an anime fan. This film is amazing and shouldn’t be missed.

Polar Review: New paint on something not so new